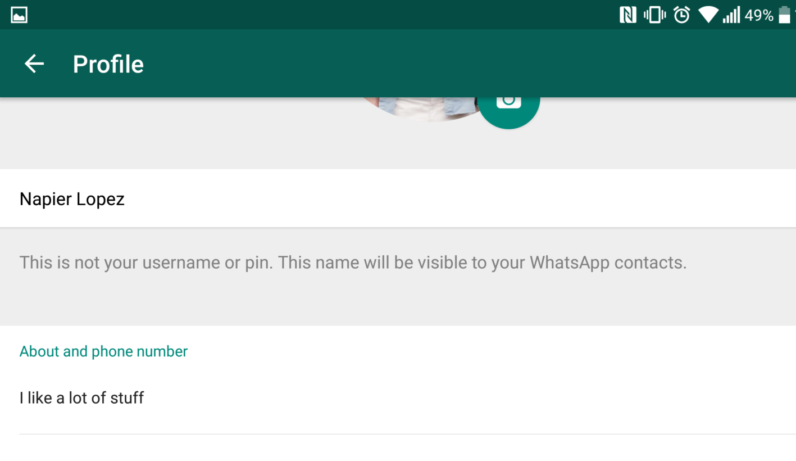 WhatsApp recently introduced a very Snapchat-esque Status feature, complete with its own tab on the app’s main screen. In doing so, WhatsApp also removed the plain-old text statuses, much to the dismay of us old farts who can’t be bothered with the full screen bonanza of the new design.

Fret no more. As spotted by Android Police, WhatsApp has brought the text status back into the picture in its latest Android beta. As before, it can be found under your profile settings, listed under the “About and Phone Number section.” It seems WhatsApp is transitioning it more into a simple bout blurb than an actual regularly updated status message.

Then again, I’m not sure I’ve ever updated my WhatsApp profile since I first joined, so maybe there’s a reason for the new 24-hour design.

And no, this isn’t getting rid of the new status, or its new tab, though I wonder how long that feature will last in its current form. For all Facebook is intent on copying Snapchat – it introduced a nearly identical feature for Messenger just yesterday – I’ve not seen any of my friends post one of the new statuses on WhatsApp yet.

You’ll have to sign up to be a beta tester in the Play Store to try it out, or grab the apk.

Update 3/15/17: WhatsApp has confirmed the feature is rolling out to everyone on Android over the next week, and will arrive “soon” on iPhone. Here’s the company’s statement on resurrecting text statuses as an About section:

We heard from our users that people missed the ability to set a persistent text-only update in their profile, so we’ve integrated this feature into the ‘About’ section in profile settings. Now, the update will appear next to profile names anytime you view contacts, such as when creating a new chat or looking at Group info. At the same time, we’re continuing to build on the new Status feature that gives people fun and engaging ways to share photos, videos and GIFs with their friends and family throughout their day.

So at least if you hate the new Snapchat-esque ones, you can just ignore the tab and stick to the classic feature. After all, why not have both?

Read next: Why Alexa and Siri would make terrible companions