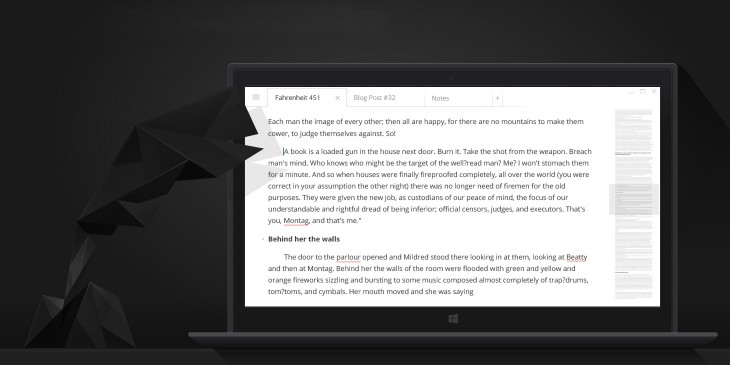 When I joined The Next Web full-time nearly six months ago, I was looking for ways to streamline my workflow — writing up articles, in particular.

I tried out a ton of Windows apps to help me compose posts, but nothing to seemed to fit the bill. I previously used a combination of a little-known notepad replacement called Kewlpad and the popular note-taking super-app Evernote, but they had their drawbacks.

Kewlpad has a tiny footprint, but lacks essential features to help your writing along, such as auto-save and the ability to format text. On the other hand, Evernote does a great job of keeping your notes organized and within reach, but it’s a bit bloated and doesn’t really get of your way when you just want to write.

I was glad to stumble upon Write, a new text editor that’s geared more towards bloggers than coders. It’s still in beta, but works just fine and the developers have interesting plans for its future.

Write has everything I want in a text editor: auto-save, a tabbed interface for working on multiple files simultaneously, spell-check, Markdown support, text styles and basic formatting, autocomplete, unlimited undos and a distraction-free writing mode.

It takes up only about a third of the RAM Evernote calls for. It may not seem like a big deal (Evernote uses about 60-70MB of memory, while Write generally stays under 20MB), but I’ve got several tabs open on an extension-laden copy of Chrome, along with Photoshop and other apps for team messaging on my aging Dell Inspiron. My laptop needs all the free memory I can spare for it to just chug along.

Plus, Write’s minimalist UI does away with buttons and toolbars, lets you focus on your work, even in windowed mode. I frequently resize Write to as small as it will get, so I can look at a couple of other apps on my dual-monitor setup while jotting down notes.

While cloud syncing isn’t yet available, I began saving all my documents into a Dropbox folder so I have all my files on every PC I use.

Prior to Write, I’d tried alternatives like Adobe Brackets, Sublime Text 3, Notepad++ and NoteTab Light. These are great apps, no doubt, but they’re laden with features designed to make programming simple, and don’t offer as clean and clutter-free an interface as Write does.

With Write, I never have to worry about losing my work or slowing down my PC when I need to check my notes while writing a post. The app offers a fine balance of functionality and efficiency, and it looks better that most other options out there.

Write version 1.0 is slated to launch on August 1, and will include cloud syncing, unlimited undos across multiple desktops, multiple writing sessions, search, and a dark UI theme.

While the offline version will remain free, Write Cloud will cost about $10 a month or $100 a year. The developers are also working on OS X and Linux versions, but haven’t yet announced launch dates for these.

If you’ve been looking for a better writing app for Windows, I highly recommend giving Write a try.

Read next: Watch now: The world's most unbelievable startup