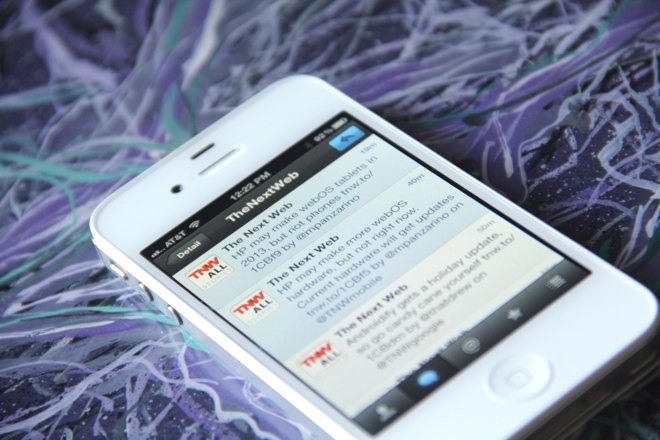 There has been a very decent amount of backlash about the release of the new Twitter 4.o, especially due to its iPhone iteration. We did a walkthrough of the Twitter app and definitely had our issues with the changes in the app. It looks like users did as well, because some popular third-party apps saw a significant sales boost yesterday.

The popular Tweetbot client from developer Tapbots saw a 2.5x boost in sales versus the day before, which the team described as an “average Wednesday”. Tweetbot has also gone from the #15 top paid app to the #3 top paid app in Social Networking category on iTunes.

Guys please stop complaining about the new Twitter app, they might revert back and I’m really enjoying the increase in sales.

Tapbots has responded to the buzz by putting Tweetbot, normally $2.99, on sale for $.99 for a limited time. We reviewed the app here and found it very nice.

The negative buzz about the Twitter 4.0 app for iPhone may have also affected the sales of The Icon Factory’s Twitteriffic, which saw a boost in sales yesterday, but it is difficult to tell. The company said that while it had seen an increase in sales, it also released a new version of its app with several improvements, so it is impossible to divine whether the improvement in sales was due to the backlash.

The message about Twitter’s new direction is fairly clear, it wants to appeal to the biggest amount of users possible, and it’s doing that by streamlining the app and expanding on its discovery. Unfortunately, there is definitely some tweaking needed in the Twitter app for iPhone. Many tech writers, like Benjamin Brooks, Shawn Blanc and John Gruber have voiced opinions on the jarring nature of the changes in the app and its overall feel.

We’ve reached out to Twitter to ask them about the rationale for some of the changes, we will be sure to inform you if we receive a reply.

Obviously, Twitter still gets users interacting with its service via third-party apps, and the experience of Twitter 4.0 is clearly centered around onboarding new users, discovery and opportunities for advertising. So I don’t hink that this is distressing them any.

Still, it does show that there is a desire by many existing Twitter users for a more robust and more polished Twitter client.