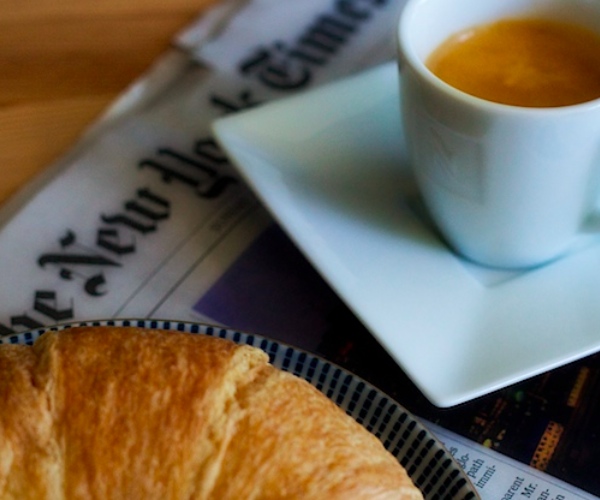 While I started to put together a list of the ten best news apps of 2010, I paused to think about how drastically our consumption of the news has changed over the past year. Fortunately, my brilliant colleague Martin Bryant has written a post about just that, “How Online News Evolved in 2010.”

Essentially, the iPad and Twitter have brought new media back to rock and roll status. In response, media companies who were still mourning the twilight of print, can now experiment with ways to make a buck again. The best media companies have been on Twitter for years and are now tailoring their sites for mobile, developing Web apps for Web stores like Google Chrome’s and pushing out super slick apps for the iPad and other reader devices.

We consumed a lot of news in 2010. But how did we consume it? On your tiny iPhone screen? Hopefully not. The best way to consume news this year was in a socially curated, real-time fashion with big pretty pictures and video. Here’s how:

It’s a classic. If you need to drive across a desert, drive a Hummer. If you need to aggregate the Internet, use Google Reader. A fellow blogger PSFK writer, Kyle Cameron Studsill once told me that he kicked his caffeine addiction by replacing his morning cup with 30 minutes of Google Reader bliss. The Web-based aggregator, released in 2005, is still a rushing news stream in 2010. It reads Atom and RSS feeds online or offline and makes for easy sharing.

According to Compete, Twitter had 26 million visitors this past November with over 50 million tweets a day. The two greatest aspects about consuming news on Twitter is that one, every important media outlet is on Twitter and two, you can choose your news as it streams in front of your eyeballs. For a quick look back on the past two years of Twitter, read here. But with millions of tweets per day, monitoring Twitter for real-time news can be stressful. Enter: Lazyscope. Lazyscope describes itself as “x-ray vision for Twitter.”

Watch this video to see it in action: (And see if you can spot the big boss @ minute 2:04)

As the video points out, you can subscribe to as much or as little information as you want. If someone only posts great pictures, but has annoying tweets, you can subscribe to their photo service and view it in Lazyscope. Someone has a great YouTube channel? Add that too. It’s truly lazy content aggregation, brought to your desktop.

Techmeme is a ranked list of tech blogs and less-bloggy news sites ordered by how often a site appears on Techmeme. According to Gabe Rivera, Techmeme’s founder, “This is shaped by Techmeme’s view of tech news, which is short on stuff like developer technologies, video games, clean tech, space tech, etc, and heavy on web/internet/mobile/Apple news.”

Mediagazer is to Media as Techmeme is to Tech. This March, Techmeme launched Mediagazer “to focus on the content production and distribution business, organizing topics as wide as journalism, blogging, video production, e-books, and digital distribution technologies.” When we get a story on Mediagazer or Techmeme, we shout “boom!” and it kind of makes our day.

4) Best on the iPad: BBC for breakfast and The New York Times for lunch For breakfast, the BBC app features an organized grid on the left and a column on the right, so it’s great for skimming the morning news or diving into specific stories easily.  Users can view news stories by geographic region or by categories including business, technology, entertainment and sport. The news ticker at the top keeps the reader up to speed in realtime and the one minute videos are a digestible way to watch the news. The app is available in English, Spanish, Russian and Arabic. You can also download content for offline browsing. Download the app here. (Free)

First, I have to say that the revamped Times app is a vast improvement over their the Editor’s Choice version, which had a lot missing. Their new App consists of the entire newspaper with all the sections, articles, videos and photos you expect from The New York Times. It’s free for now, but n.b. that they will start charging in early 2011 for a subscription. Download it here.

5) Save it for later: Instapaper for the iPad

Let’s say you suddenly find yourself overwhelmed with the amount of online content you want to read. When you have no time to digest, and want to save it for later try Instapaper. The app lets you mark a document so that later (when you’re at home in a cozy chair by the fireplace) you can go through all those documents in a clear, clean, easy to read format. The paid version of the app allows you to archive Web pages for offline reading in an iPad-optimized format that makes reading long-form content a pleasure. Download it here. ($4.99)

The New Yorker isn’t for the weak in the knees. It’s a time-tested magazine written by New York’s most brilliant minds. Admittedly, I’ve never been able to read an entire New Yorker. I stick to the more conversationally [read lighter] written pieces, anything with pictures and anything with a Brooklyn bent. And that’s why I love their Tumblr. The New Yorker promotes their content on Tumblr with quotes, video, pictures, to-do lists and tips. First, it displays the current issue’s artfully designed front cover alongside the Cartoon of the Day. Tumble down the page, and you’ll find all of the essentials of the magazine in bite size, digestible posts.

Video consumption ruled in 2010. This year there were more than 35 hours of video uploaded to YouTube each minute; more than 700 billion playbacks and there were more than 13 million hours of video uploaded during 2010. If you’ve suddenly found yourself in a predicament where you can’t download the YouTube app- say if you are still rocking the good old multimedia Nokia phone, check out YouTube’s mobile site, because it rocks. In fact, some have gone so far to say that its mobile site trumps its app. YouTube agrees, and so fittingly, they’ve made a video to prove their point.

Don’t miss 10 most watched YouTubes of 2010, read here. And although I’m not a sports fanatic, I’d like to give ESPN’s mobile site a runner’s up award. One of our TNW readers pointed out that their mobile site is far more efficient at browsing headlines than the app.

GOOD magazine made huge waves in 2006 when Ben Goldhirsh, son of entrepreneur and Inc. Magazine creator Bernie Goldhirsh launched the magazine “for people who give a damn.” As rumor has it, the media mogul left his son with loads of money and just said, “Do something good with it.” And he did. GOOD Magazine blossomed into a “media platform that promotes, connects, and reports on the individuals, businesses, and non-profits who are pushing the world forward.” The site’s many beats include the environment, urban planning, design, food, politics, culture, and health. One of its shining features is its GOOD Transparency site, which is entirely dedicated to infographics. Check out their list of this year’s most popular infographics here.

We also expect great infographics from The Guardian in 2011 since they’ve recently launched their own “Data Journalism” site.

reddit thinks of itself as “the voice of the Internet.” The social news website, (unfortunately owned by Condé Nast Digital) lets users browse and submit links and images to the site. Submissions are then voted up and down by other users, with the most successful links prominently displayed on the front page. The reddit community is a free-thinking, liberal bunch that borders on anarchism and uses LOLcats for therapy. In short, I love them. Expect a lot of WTFs, political conversations and brilliant ideas, like this recent Kindle wrapping job and hilarious photos like the one below. N.B. Reddit was founded in 2005 by Steve Huffman and Alexis Ohanian, who have since moved on to create the awesomeness of flight search that is Hipmunk.

Want to know what “reversible metabolic hibernation” is? Or how about a philosopher’s perspective on “the influence of dogmatism, superstition, and bigotry in our world”? Want to hear Christopher Poole, founder of 4Chan, talk about anonymity and censorship? Then download the TED mobile app gives users access to the wealth of inspirational talks from the TED annual conference. The videos are grouped by themes, talks and tags. Download it for the iPhone here. It’s also available on Windows Mobile and Android. (Free)

Web apps, which I mentioned at the start, were purposefully left off this list, because currently the “apps” out there are little more than repurposed HTML websites. Looking forward to 2011, when we’ll have to start paying for The New York Times’ and the Washington Post’s apps, expect web apps to play an ever-increasing role in how we consume news. More news consuming predictions for 2011 to come.

How else did you consume news this year?

Read next: The digital side of the luxury industry in 2010 and beyond