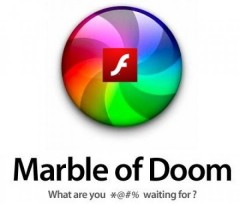 I have to preface this post by saying Mea Culpa.

You see, when Steve Jobs slammed Adobe’s Flash in February as a “a dying technology,” I was skeptical to say the least. In fact, the exact words I used were, “While Jobs is renowned for being a forward-thinker, he might be looking a bit too far forward this time.”

However, Jobs’ words turned out to be quite prescient, as they often are. Ironically, though, part of the reason for Flash’s impending demise comes from Apple’s main competitor in the OS market. You see, Adobe’s products, especially Flash, seem to have a major quarrel with Windows 7’s many 64-bit flavors.

Despite the fact that 64-bit processors have been the market standard since AMD released the Athlon-64 processor in late-2003, the software market has been pretty slow to catch up. While Windows XP’s 64-bit edition was essentially a bad joke, Vista (a worse joke) spurred the rise of the 64-bit OS.

Initially, it wasn’t particularly important, as few computers had the specs to make a 64-bit operating system relevant or necessary. However, as computers regularly began to exceed 4GB of RAM, 64-bit Windows OSes were needed to avoid wasting RAM. Now, most new PCs ship with some form of Windows 7 64-Bit edition.

Unfortunately, therein lies the problem. While Windows 7 x64 does have a nice 32-bit mode which works quite well, for some reason, certain programs have issues with certain extensions. Unfortunately, both Firefox and Chrome are on this first list. And the biggest offender on the second list (by far) is Adobe.

Indeed, repeated Adobe-related crashes are familiar to many Windows 7 users. Flash crashed Firefox so frequently (literally every time I tried to use Youtube) that it prompted me to switch to Chrome about 6 months ago. Chrome had its own set of Adobe bugbears, though. Opening PDF files would randomly crash the browser, and eventually the same Youtube issue that had appeared on Firefox resurfaced on Chrome. A reformat didn’t cure the problem, and the integration of Flash into Chrome didn’t solve the problem either. Adobe AIR, as used in Tweetdeck, also crashes with zero warning, sending my entire system into rigor mortis.

It’s easy to dismiss my issues as isolated incidents, but some very light digging revealed that I’m hardly alone. Windows 7 users have repeatedly complained about the Chrome and Firefox issues, as well as the bizarre AIR crashes.

What it boils down to for Windows 7 users is that Adobe has been unwilling to write a 64-bit version of Flash for Windows 7. It appears that a 64-bit Flash is finally on the way, but it looks like it may be too little too late.

Indeed, in the last 7 months, HTML5 has progressed by leaps and bounds. Apple’s iAds and other new innovations have done much to dispel the notion that HTML5 is non-functional and kludgey.

At the same time, Adobe’s reluctance to keep Flash compatible with the newest standards in software design has borne out many users’ critiques of the utility. It is slow. It is kludgey. And it does cause a hell of a lot of crashes.

It looks like Adobe has blown a chance to prove Steve Jobs wrong. And by wasting this chance, they’ve proven me wrong too.