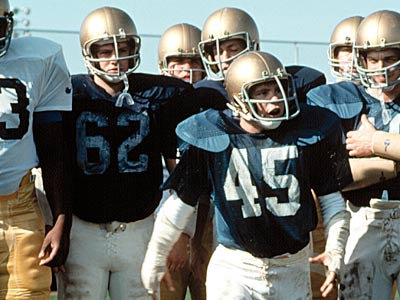 Fans of the nationally popular University of Notre Dame football team have a new way to track their Fighting Irish – on their iPads.

The free app (iTunes link) was released by NBC Sports, which has the exclusive broadcast rights to Notre Dame games. The app offers a pretty thorough set of ways to follow the team’s season, including a complete schedule, news, live scores, video clips including recaps and interviews, team stats, roster, photo galleries, Twitter updates and a display of the “Inside the Irish” blog. Of course, the app also allows you to pay for live streaming of home game for either $5.99 for the entire season or $1.99 per game.

That said, the two coolest features come in the form of notifications. On game day, you can set the app to remind you of the game – by playing the Notre Dame fight song. Then during the game, the app offers push notifications every time there is a score. Both features are brilliant ideas.

The iPad app is a “HD” counterpart to the iPhone/iPod Touch version, instead of the preferred “universal” approach, i.e. the app works on all three devices. However, since both versions are free, this isn’t too much of an issue (though we’re not sure if purchasing games transfers to other devices, which could be an issue). One other somewhat annoying aspect of the app is that right now it prominently display advertisements. Normally in a free app, that’s not even noteworthy, but especially as NBC is charging for the live games, it’s a little too much.

Beyond the lack of a universal app and the prominent ads, NBC really seems to be onto something here, and we’d suspect that many sports fans would like a similar app for their favorite team, regardless of the sport. Also, beyond mobile, we could certainly see this kind of sports app transfered to the living room, perhaps on the upcoming Google TV (the NBA has built something similar for Google TV already).

So if you’re a fan, this would seem to be a must have app. Fight fight fight!