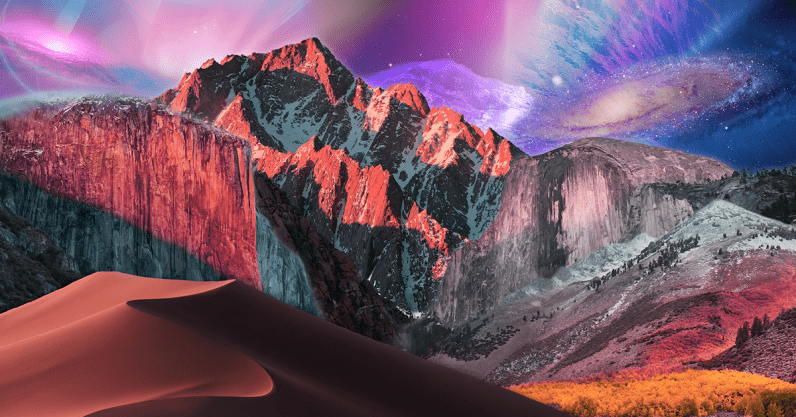 I like to think that somewhere inside the bureaucratic labyrinth of Apple’s employee structure, there’s a single person with the world’s greatest job. Each year, they only have to do a single thing: Traverse the world and try to take a sick photo of a landscape for the latest macOS wallpaper.

Does this job exist? Who knows, but I can dream.

Anyway, one of the most fun (I use this term loosely) parts of new macOS releases is discovering what new photo they have as their backgrounds. You know, like the one the company’s currently using on macOS 10.15 Catalina:

Pretty, right? That (imaginary) single Apple employee who takes these photos sure did a good job.

Thing is, as soon as there’s a new macOS update, we tend to forget about what came before — but no longer! Why? Because Twitter user Jenny (AKA @J3nRa1n) did the thing no one else thought to do and combined every default macOS background from 10.0 to today into one magnificently psychedelic masterpiece.

No one asked for this. But here it is: every macOS wallpaper from Mac OS X 10.0 Cheetah to macOS 10.15 Catalina combined. I highly doubt that anyone will ever use this. But I’ll use it lol pic.twitter.com/Qh9Kyo3OxT

It’s phenomenal. It’s like a magic eye painting. Or one of those weird drawings an AI created. In other words, it’s art.

A brief history of macOS wallpapers

Since macOS 10.0, Apple’s default computer art can be split into four broad eras. The first is what some people refer to as the “aqua” phase, but I’m going to call it the “swishy-swoshy-blue-shit” time.

The next macOS wallpaper era — which ran from 10.5 Leopard to 10.8 Mountain Lion — would probably be described as “cosmic,” but I’ll call “twinkly space stuff.” Those macOS wallpaper designs were like this:

The next stage in macOS wallpapers was a bizarre one. For some folks this would fall under a “California” umbrella, but I prefer to see this as a short-lived experiment that didn’t pan out, like the George Lazenby James Bond movies.

So, say hello to the wave macOS wallpaper from 10.9 Mavericks:

Finally, we have the macOS wallpapers running from 10.10 Yosemite to 10.15 Catalina, which you might call “landscapes,” but I’m going to refer to as “protrusions.”

So, before we sign off, let’s have a final look at the psychedelic combination of all these macOS wallpapers:

If you’d like to get a 5K version of this image, you can do so here.

Magnificent. All that’s left to say is I hope that somewhere, the Apple employe with the magical job is staring at this picture and screaming. Is it out of joy or fear? Well, that’s up for you to decide.

Read next: Satoshi Nakaboto: ‘Bitcoin is now worth as much as McDonald's’