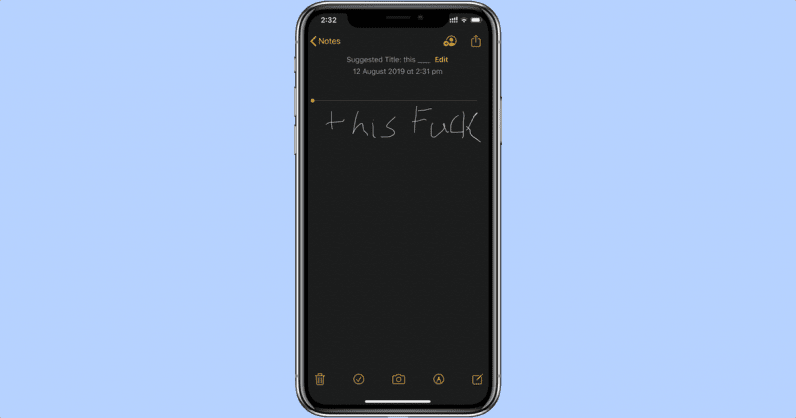 Apple works very hard to maintain a ‘clean’ and family-friendly image. So much so that it censors handwritten words when suggesting a title for notes.

Today, a user in r/iOSBeta subreddit noted the company’s algorithm muted the word ‘fuck’ when recommending a title for the handwritten note.

Apple seems to have introduced this feature in the new iOS 13 beta. I also tried this out on my phone, running the same software, and Apple did indeed censored the word ‘fuck.’ However, Apple doesn’t seem to be muting every cuss word. For instance, it didn’t mute ‘ass.’

We’ve asked Apple for more details, and we’ll update the story accordingly. This is a hilariously bad attempt by Apple to keep its suggestions at a PG-13 level. It’s not clear what the company wants to achieve by this, there are tons of cuss words one can write and Apple might not be able to detect them at all.

So, what’s the fucking point of this, Apple?

Read next: CHEAP: Run to catch $30 off the Garmin vívosmart HR fitness tracker!