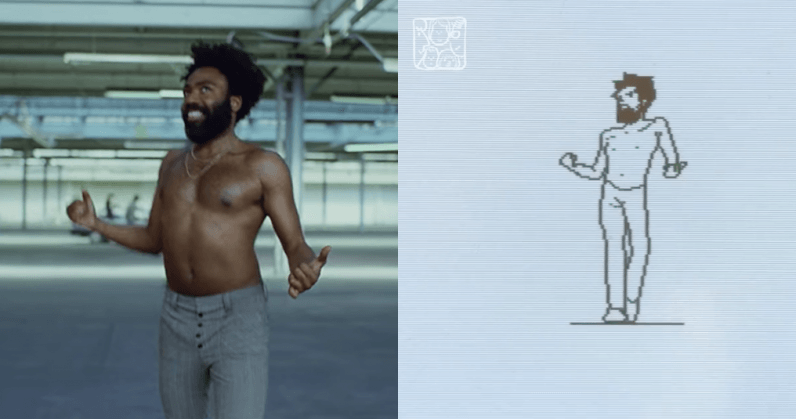 As music videos go, Childish Gambino‘s “This is America” is an instant classic. The retired alter ego of actor Donald Glover really nailed the finer points of American social commentary, offering an behind-the-curtain view of what it’s like to live in the United States more than 50 years removed from the infamous race riots in the 1960s.

I could go on about this video for days. Instead, though, I want to talk about a different chef-d’oeuvre, a masterpiece in its own right by a digital artist on Instagram known as Pinot.

An animator and illustrator, Pinot (aka Wachyu Ichwandardi) currently resides in New York, hailing originally from Indonesia. His work hit a viral note last week as his pixelated adaptation of Childish Gambino‘s über popular video amassed nearly three million views. In it, Pinot uses an old Macintosh SE computer running MacPaint. After painstakingly drawing every frame, he uploaded the images into another ancient piece of software, MacroMind, to animate it.

The finished product mirrors the beginning of the video to a tee. Check it out below.

The resulting work is nothing short of astonishing. Over what had to be dozens of hours, Pinot currently has 375 frames, and it appears he’s still working. It’s unclear whether he plans to finish the entire video… but… fingers crossed.

Read next: There are numerous reasons to dislike Elon Musk. This isn't one of them.