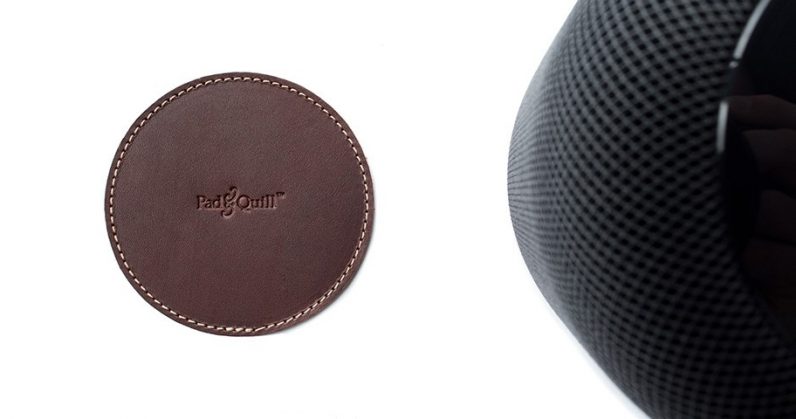 Earlier this week, Apple was called out in the press over the white stains its HomePod smart speakers were leaving on wooden surfaces in owners’ homes.

Unsurprisingly, accessory makers rushed to make a quick buck by launching coasters to prevent this from happening: AppleInsider spotted Pad & Quill’s $20 offering, made with American full-grain leather and sized so your HomePod can perch on it without leaving white rings around the house. ” You’ll love it, but don’t put a ring on it,” reads the copy on the product page.

What’s troubling, though, is how we got here in the first place. Apple is awfully late to the smart speaker game as it is, having shown up years after the Amazon Echo and Google Home launched. That should have given the company some time to test for such issues.

Responding to The Wirecutter’s questions about it, Apple said the rings are caused by oils diffused between the speaker’s vibration-dampening silicone base and the wood, and suggests wiping the marks off with a damp or dry soft cloth, moving the HomePod to a different surface, or refinishing your furniture.

That’s what you get for buying one of the priciest connected speakers on the market today.

To be fair, it isn’t just the HomePod; Sonos’ $200 One speaker is guilty of nearly the same thing, according to Tom’s Guide; the company said that it’s the first time it’s hearing of this.

It’s hard to decide which response is worse, but both are terrible. These products are introducing problems that aren’t widely known, and could anger a lot of customers (imagine if your HomePod ruined your treasured antiques) – all while talking up their painstaking design and attention to detail.

There are better ways to handle this – and arguably, better ways to design speakers so they don’t wreck furniture in the first place. If your product requires a coaster and isn’t a glass for beverages, you built it wrong.

Read next: Open links on any web page in Chrome using just your keyboard with this handy extension