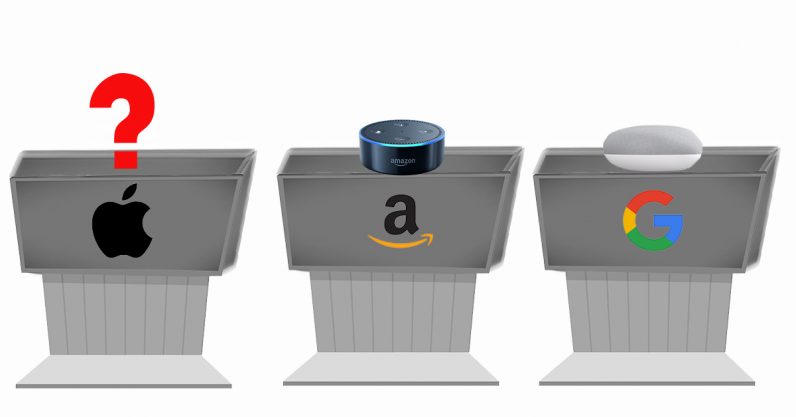 There are few greater sights for consumers with weary wallets than seeing tech giants duke it out for our affection. When companies compete consumers win. And last year, shoppers got a lot of love when both Google and Amazon slashed prices in an effort which served to undercut Apple.

Over the holiday season, Amazon’s best selling item was the heavily-discounted Echo Dot. The savings were so good, in fact, that experts think the company sold the product for less than it costs to make it. Google did the same thing with its Home Mini speakers.

Amazon and Google may not always agree, but when it comes to smart speakers they’re apparently on the same page, while Apple isn’t even in the same book. Hell, Tim Cook and co. might not even be in the same genre anymore.

Maybe the AI thing isn’t very important to Apple, or perhaps the company’s leadership thinks the smart speaker market won’t last. It may be ignoring the present in its predictions for the future, if either are true.

There was a time when Apple seemed to have the technology universe figured out. The Cupertino company used to drop a device like the iPhone and all but the stodgiest of haters would be forced to nod their head and declare it worthy of praise. Perhaps those days have passed.

In the race to capitalize on consumers’ new love affair with smart home technology Apple is doing what it always does: taking its sweet time. In fact, it kinda looks like it’s barely even trying.

And we’ve seen this before. The buzz before the iPhone came out wasn’t exactly deafening. Everyone else was making a killing in the smartphone industry and Apple was pushing iPods. We all know how that worked out, the iPhone was the umm, well, it was the iPhone of cellphones. That’s how big its impact was.

Why then, you might ask, would some dimwit tech journo suddenly decry the geniuses at Apple as nothing more than a has-been group of over-the-hill rock stars from yesteryear?

Because it looks like the magic formula is beginning to offer diminishing results. If the Homepod comes out and sells 20 million units, we’ll happily admit we’re wrong. But according to Reuters, some analysts are predicting an uphill battle for Apple to catch up.

Without a smart speaker in sight – the Homepod still doesn’t have a release date other than “first quarter 2018” – Apple must be gambling on revolutionizing the smart home in the same way it did the smart phone. And it would be incredibly exciting if it did!

Imagine, Tim Cook takes the stage this summer and announces Apple’s newest gizmo: some kind of new smart device that changes everything and makes every other company start chasing it again.

But this is 2018, the smart speaker is already here. Sure, there’ll be refinements to the designs and they’ll evolve. And maybe the smart home craze is a fad that’ll die down once 3D-printed homes become normal and come with their own integrated smart systems, or something.

If Apple has some top-secret killer app baking in its ovens, it’s going to have to be the iPhone of smart speakers in order to make a dent in Amazon and Google’s lion-share.

This may annoy long-term Apple fans, but the writing is on the wall. A search engine and a bookstore just annihilated Apple Computers in a race to develop hardware for a brand-new and burgeoning market.

It might be time Apple stopped taking business advice from the year 2007.

Disagree? Sound off in the comments and tell us why.