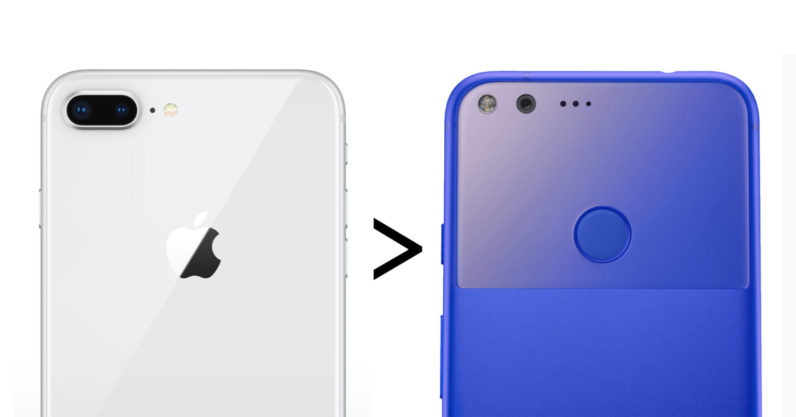 The iPhone may have sparked the mobile photography revolution, but Android devices have matched or surpassed Apple’s offering for several years now – at least according to metrics like DxOMark’s intensive camera testing.

Now Apple’s fighting back. The new iPhone 8 and 8 Plus surpass Android scores for the first time in a few years, and the iPhone X will almost certainly be better.

The iPhone 8 scored a 92 on DxOMark, while the iPhone 8 Plus scored a remarkable 94, easily taking the crown for best score on the camera reference publication. The Google Pixel and HTC U11 are currently tied for the top spots among Android phones, with a score of 90, while the iPhone 7 and 7 Plus had scored an 85 and 88, respectively.

DxO cites an improvement in HDR, exposure calculation, and the telephoto lens performance as being main drivers of the score increase. In particular, the iPhone 8 seems to be the first phone able to match the Google Pixel’s HDR performance.

The last time Apple surpassed all the Android competition in a given year was back in 2014. And considering the iPhone X adds optical image stabilization and a wider aperture to the telephoto camera, you can expect a slightly higher score.

Of course, numbers aren’t everything, but DxOMark tends to be a reliable reference for different aspects of camera performance – it first made its name testing professional camera sensors.

In any case, competition is what keeps making smartphone cameras better. Google’s new Pixel arrives in just a few weeks and is sure to have some tricks up its sleeve, and considering Samsung hasn’t made a huge leap in performance since the S6 (because it hasn’t had to), you can bet next year’s model will put up a bigger fight.

Apple iPhone 8 Plus reviewed: The best smartphone camera we’ve ever tested on DxOMark

Read next: Why bootstrapping your startup is usually the best option