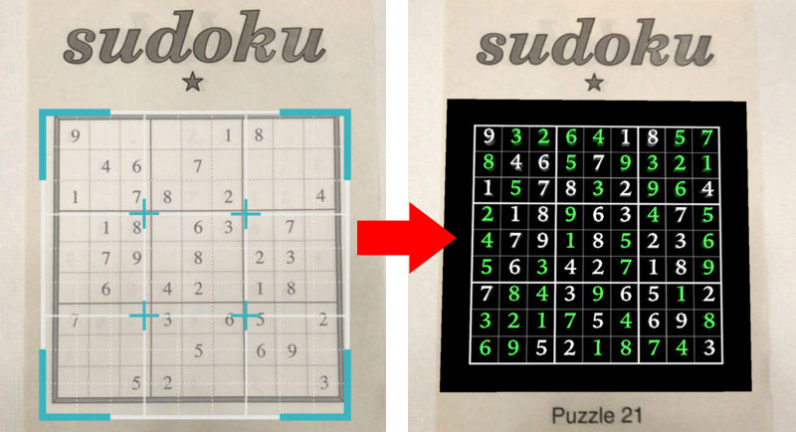 If solving sudoku puzzles on your phone no longer does it for you, there might be another sudoku-related activity you might revel in: Watching artificial intelligence crack the puzzles for you at an incredible pace, courtesy of Apple and its ARKit framework.

Available for iOS 11, Magic Sudoku is an ARKit-powered app that uses augmented reality to complete the puzzles in the physical world. All you need to do is point your handset’s camera at a puzzle printed in a book or a newspaper and – voilà – the app will take care of the rest.

Here is how this works:

Unfortunately, the app appears to work only with entirely unsolved puzzles, which sort of spoils all the fun of playing sudoku in the first place. But in spite of this, it is still a fascinating display of ARKit’s capacities.

Another nuisance about Magic Sudoku users are reporting is that it struggles to capture puzzles on desktop monitors – possibly due to difficulties processing the vertical plane. Nevertheless, it seems to handle puzzles on paper and iPads without any hiccups.

As developer Brad Dwyer explains, the app relies on Apple’s machine learning framework, Core ML, as well as its image analysis sofware, Vision, to solve the puzzles in real-time.

You can get Magic Sudoku from this link. But be advised: It will only for those running iOS 11 on iPhone models newer than the 6S; alternatively, the new 9.7-inch iPad or the older iPad Pro.

Read next: These companies replace your banners with art, flowers and sunshine