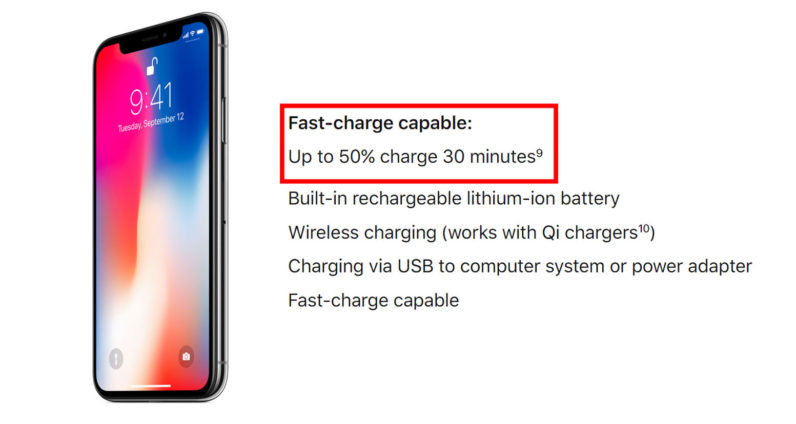 While Apple finally added wireless charging to the iPhone X and 8, there was no mention of fast charging – arguably a more useful innovation – during the company’s keynote. Turns out Apple just decided not to tell anyone: The new iPhones do support fast charging, but you’ll need to buy a special adapter to use it.

9to5Mac spotted the feature in Apple’s official spec pages for its new iPhones. The company lists all its new phones as being able to charge to 50 percent from a drained battery in 30 minutes, which is comparable to most of Android flagships. Unfortunately, the fine print suggests you’ll need one of Apple’s USB-C power adapters ($49+) and a USB-C to lightning cable ($25+) for it to work. Paying another 75 bucks on a $1,000 phone for such a basic feature seems a little unfair.

Granted, we don’t know for sure what type of cable comes with the iPhone X/8, but the “in the box” section of the specs does not specify a USB-C cable. Apple’s MacBook and MacBook Pro both specify USB-C in the specs, so chances are the new iPhones come with a regular old USB-A cable. If we’re lucky, Apple could include USB-C charging gear at a discount once pre-orders open, but I wouldn’t count on it. In any case, I’m sure third-party accessory makers are already working on more reasonably-priced solutions.