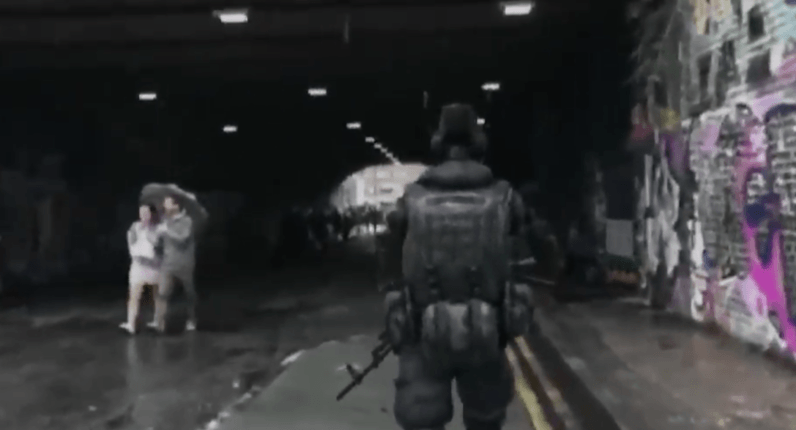 Apple is rapidly winning over the hearts of augmented reality enthusiasts with its yet-to-be officially released ARKit.

Numerous talented artists and developers are already using the beta version of the new framework to build magical apps and experiences – and the astounding results are not lagging behind either.

Toying around with ARKit and Unity3D, independent game developer Duncan Walker has created a stunning augmented reality film experiment that literally puts virtual robot commanders on the street side by side with real humans.

Here is a little demo he shared on Twitter:

The final effect is frankly nothing short of impressive. In fact, the rendered models appear to be authentic enough to pass as natural human movement: The shaky hand-held camera dynamics coincide almost perfectly with the movement of the robots.

The other part of the magic is how credibly ARKit maps out renders onto footage from the real world. While professionals might be able to spot some inconsistencies in light sources, this is hardly a nuisance to the untrained eye.

In case you’re wondering how Walker achieved this outcome, he says he shot the footage with his iPhone 7. He then used Unity to model the characters and set up the scenes, before eventually resorting to the ARKit plugin to render the models into the video.

In the weeks following the release of the beta version of iOS 11, ARKit has confidently occupied the spotlight. So far we have seen developers use the software to create magical gaming experiences and to whip up virtual tools for the real world – and people seem to be digging the results.

Apple has often played a crucial role in propelling cutting-edge technologies to the masses; and if the early excitement for ARKit is matched once iOS 11 rolls out globally, the Cupertino giant might be about to kick off a new era of entertainment.

Read next: Facebook introduces new tool to kill off fake news leading up to Kenya elections