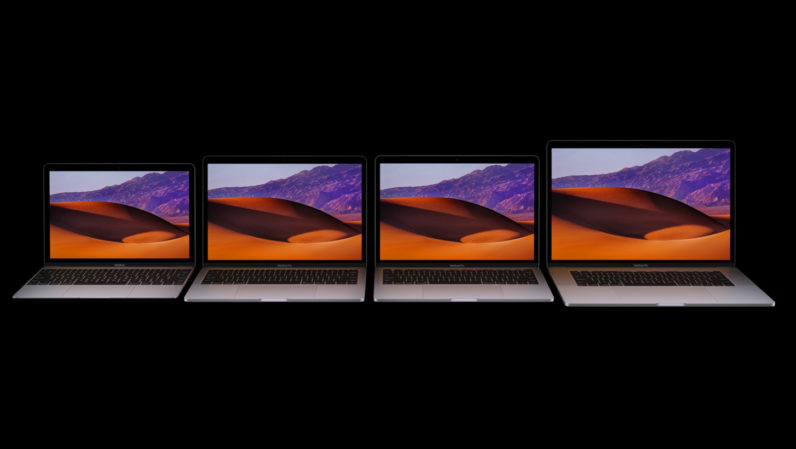 Apple’s refreshed MacBook Pros were met with somewhat mixed reactions last year, in part because of their specs. Rather than use the latest Kaby Lake chips, Apple opted for prior-generation Skylake processors.

That’s no longer an issue. At WWDC 2017, Apple updated all its MacBook and MacBook Pro configurations with Kaby Lake, and a few other improvements. While these aren’t going to dramatically improve performance and there’s little reason to upgrade if you bought one last year, there are some subtle advantages to be found.

You can read the spec sheet if you wish here and here, but just know that Kaby Lake won’t provide huge gains over Skylake. It’s somewhere in the realm of 10 percent faster, depending on what kind of work you’re doing, though Kaby Lake will likely offer the biggest improvement for the Y-series chip on the 12-inch MacBook. It’s a similarly small gain for the integrated graphics and battery life, although Apple isn’t officially claiming any improvement on longevity.

One big advantage to Kaby Lake that has little do with processing power is a hardware decoder for copyright-protected (DRM) 4K video. Basically, most 4K shows and movies feature extra encryption to prevent pirating, and it requires special hardware to decode. That’s the reason why so few computers can play Netflix in 4K, although Apple would still have to enable the feature before you can playback DRM-protected 4K video. I imagine that’s only a matter of time, though – it sucks to have a fancy retina display only for Netflix to not take full advantage of the resolution. Yes, I know the Retina MacBooks aren’t 4K, but the extra crispiness would be appreciated.

Another subtle improvement is Apple says it’s improved the SSDs by “up to 50 percent.” That’s 3.2GBps read and 2.2 GBps write speeds (tested on the 512 GB drive), which is legitimately very fast. If you do a lot of photo or video editing, you’ll welcome those speeds – it’ll probably be more noticeable than the processor improvement.

Meanwhile, the 15-inch MacBook Pro now comes with an AMD Radeon Pro 555 in the lowest configuration, and is configurable up to a Radeon Pro 560.

Pricing has largely remained the same, except the MacBook Pro without Touch Bar now starts at $1,299 thanks to a new 128 GB storage configuration. If you don’t need all that much on-board storage, it makes for a solid entry level device. That said, the now-ancient MacBook Air remains Apple’s cheapest device. It received a small clock speed bump (although Apple didn’t specify what generation processor) and continues to start at $999.

Nice of Apple to show the Air some love, I suppose, but that low resolution hurts my eyes. It seems like a terrible investment to buy an Air in 2017, and I wish Apple would bring down pricing on the MacBook or MacBook Pro far enough to be a proper alternative.

Read next: Apple gets High (Sierra), builds a vaporizer