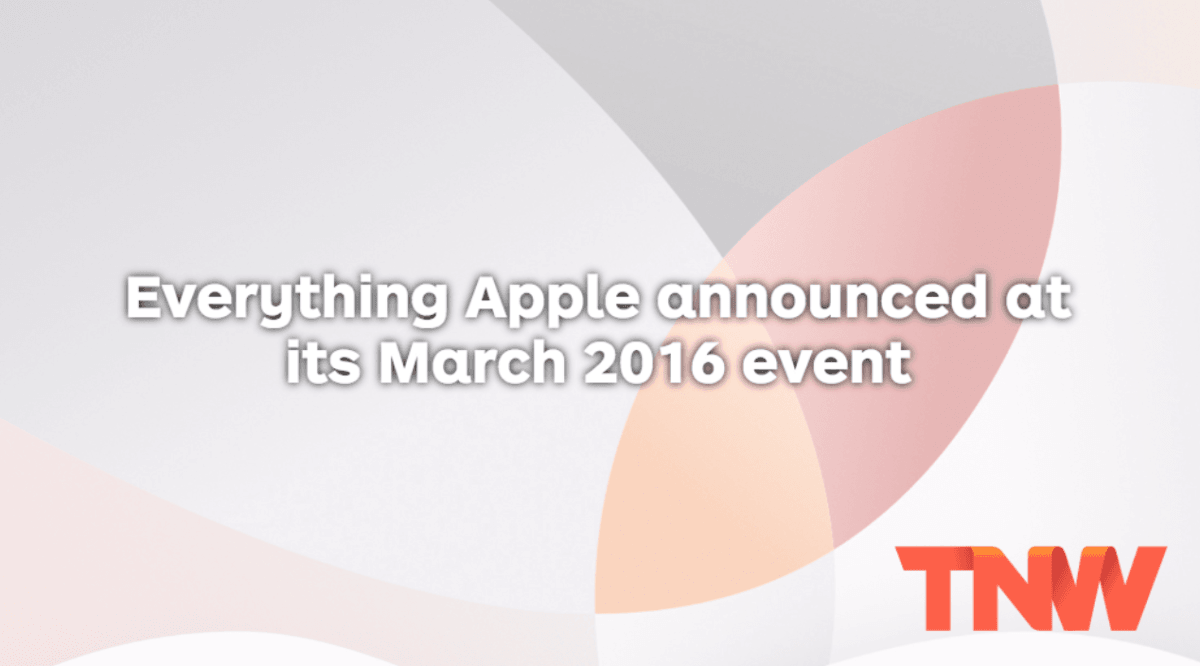 The Apple event is a wrap – if you missed the hour-long keynote, we’ve got everything Apple announced summarized in one place for you. For further details, see the link below each sections for full reports.

Apple CEO Tim Cook kicked off the announcement with a brief statement about its ongoing battle against the FBI regarding the San Bernardino iPhone case.

Shifting quickly to other civic causes, Apple’s VP of Environment Lisa Jackson announced that 93 percent of its facilities worldwide run on renewable energy, and reached its goal of 100 percent in 23 countries, including China and the United States. She also said 99 percent of its packaging is now made from recycled paper.

Apple also announced CareKit – a new research tool for people to better understand data for various health conditions. iPhone users can now better track vitals like temperature, heart rate or range of motion if they have Parkinson’s Disease or have just undergone surgery, for example. This data can then be shared with their loved ones or doctors to adjust treatments.

CareKit will be available this April.

Nothing majorly exciting with Apple Watch updates during this announcement except a price cut – now down as low as $299 – and some new watch bands, such as a woven nylon bands with some funky color choices. Apple’s also added new Sport and leather bands.

Since the new Apple TV shipped late last year, Cook says there are now more than 5,000 Apple TV apps. He also mentions a few new updates coming to the OS, such as folders and voice dictation so you can say your password to sign in, and check out your Live Photos from the device.

Expect to kick your loved ones out of the room if you are too lazy to type your password in.

➤ Apple just announced even more bands for Apple Watch, and slashed its price to $299

Here it is: a smaller iPhone. Apple even made a small joke about the fact that the product was heavily rumored and leaked.

The iPhone SE is a 4-inch device that comes with a 64-bit A9 chip and an M9 motion coprocessor – making it equivalent to the iPhone 6s. It has a 12-megapixel camera with all the standard features, such as panorama, time lapse, slow-motion, 4K video capture, and Live Photos. The selfie cam has a true-tone flash as well.

The iPhone SE starts at $399. Without a contract, you can purchase the device via its monthly payment plan starting at $17.

Pre-orders will start on March 24 and will be available in stores on March 31. Apple plans for the device to be in 110 countries by the end of May.

➤ Apple officially introduces the SE, a new 4-inch iPhone for only $399

Apple announced some new updates to iOS 9.3, such as password protection on notes, a night shift sleep-friendly lighting mode, and app suggestions for Health apps.

Apple News will now feature top stories and suggest Editor’s Picks for easy browsing. CarPlay gets a few updates too – with song suggestions and Maps locating nearby points of interests such as gas stations and rest stops.

Lastly, Education gets an update with more features for students, teachers and administrators.

➤ Here are the cool new features in iOS 9.3, which Apple just launched to the public

Here’s another device we were expecting – an update to the iPad Pro. Today, Apple announced a 9.7-inch Retina display iPad Pro that weighs less than one pound.

The new iPad Pro has a Oxide TFT display for high contrast ratio, and is 47 percent less reflective than the iPad 2 – the lowest reflectivity of any tablet, Apple says. The device also has the brightest screen with the widest color gamut Apple ever built. It’s designed to recognize ambient light to adjust the colors onscreen to best cast the tones for the most natural hues.

It also comes with four audio speakers, A9X chip, M9 motion coprocessor, a graphics drive as powerful as an Xbox 360, and a ‘Hey Siri’ handsfree compatibility.

Apple says it made a smaller iPad Pro to cater to those who want a powerful but more commute-friendly devices. It also admits it wants to attract Windows users over with the new iPad Pro as an “ultimate PC replacement.”

The device starts at $599 for 32GB and Wi-Fi and goes all the way up to 256GB of storage. That configuration applies to the original 12.9-inch iPad Pro as well.

Pre-orders start on March 24 and ships on the 31st.

➤ The iPad Pro just got smaller, and you’re probably going to love it

Read next: Tim Cook has turned Apple into a political juggernaut