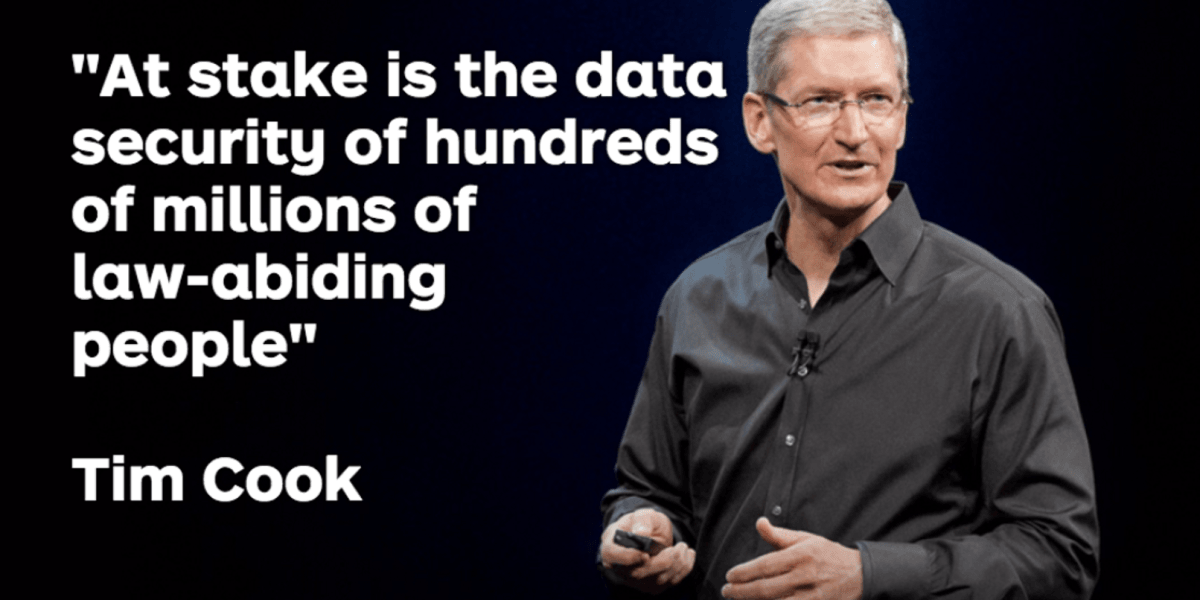 Tim Cook sent an open letter to Apple employees today calling the government’s request for the unlocking of the San Bernadino’s shooter suspect’s iPhone a threat to the civil liberties of millions of US citizens.

The letter runs the now well-publicised and likely long-running back and forth between Apple and the FBI over whether the request for unlocking (or the tools to unlock the device itself) consituted a single use-case or a slippery slope to a wider backdoor being used to access devices in future.

“As individuals and as a company, we have no tolerance or sympathy for terrorists. When they commit unspeakable acts like the tragic attacks in San Bernardino, we work to help the authorities pursue justice for the victims. And that’s exactly what we did.

This case is about much more than a single phone or a single investigation, so when we received the government’s order we knew we had to speak out. At stake is the data security of hundreds of millions of law-abiding people, and setting a dangerous precedent that threatens everyone’s civil liberties.”

Describing Apple as “uniquely American,” Cook rounds out the letter requesting that the FBI recants its request to unlock the device.

“We feel the best way forward would be for the government to withdraw its demands under the All Writs Act and, as some in Congress have proposed, form a commission or other panel of experts on intelligence, technology and civil liberties to discuss the implications for law enforcement, national security, privacy and personal freedoms. Apple would gladly participate in such an effort.”

This is unlikely to be the end of the discussion, and probably not the last time the issue of consumer rights and protection will be raised following requests from law enforcement.

On Sunday, the FBI posted a new statement saying that:

The particular legal issue is actually quite narrow. The relief we seek is limited and its value increasingly obsolete because the technology continues to evolve. We simply want the chance, with a search warrant, to try to guess the terrorist’s passcode without the phone essentially self-destructing and without it taking a decade to guess correctly. That’s it. We don’t want to break anyone’s encryption or set a master key loose on the land. I hope thoughtful people will take the time to understand that. Maybe the phone holds the clue to finding more terrorists. Maybe it doesn’t. But we can’t look the survivors in the eye, or ourselves in the mirror, if we don’t follow this lead.

Reflecting the context of this heart-breaking case, I hope folks will take a deep breath and stop saying the world is ending, but instead use that breath to talk to each other. Although this case is about the innocents attacked in San Bernardino, it does highlight that we have awesome new technology that creates a serious tension between two values we all treasure—privacy and safety. That tension should not be resolved by corporations that sell stuff for a living. It also should not be resolved by the FBI, which investigates for a living. It should be resolved by the American people deciding how we want to govern ourselves in a world we have never seen before. We shouldn’t drift to a place—or be pushed to a place by the loudest voices—because finding the right place, the right balance, will matter to every American for a very long time.

On Monday, families of victims of the attack announced that they were filing a legal brief in support of the government’s attempts to force Apple to unlock the device.

As you know, we use encryption to protect our customers — whose data is under siege. We work hard to improve security with every software release because the threats are becoming more frequent and more sophisticated all the time.

Some advocates of the government’s order want us to roll back data protections to iOS 7, which we released in September 2013. Starting with iOS 8, we began encrypting data in a way that not even the iPhone itself can read without the user’s passcode, so if it is lost or stolen, our personal data, conversations, financial and health information are far more secure. We all know that turning back the clock on that progress would be a terrible idea.

Our fellow citizens know it, too. Over the past week I’ve received messages from thousands of people in all 50 states, and the overwhelming majority are writing to voice their strong support. One email was from a 13-year-old app developer who thanked us for standing up for “all future generations.” And a 30-year Army veteran told me, “Like my freedom, I will always consider my privacy as a treasure.”

I’ve also heard from many of you and I am especially grateful for your support.

Many people still have questions about the case and we want to make sure they understand the facts. So today we are posting answers on apple.com/customer-letter/answers/ to provide more information on this issue. I encourage you to read them.

Apple is a uniquely American company. It does not feel right to be on the opposite side of the government in a case centering on the freedoms and liberties that government is meant to protect.

Our country has always been strongest when we come together. We feel the best way forward would be for the government to withdraw its demands under the All Writs Act and, as some in Congress have proposed, form a commission or other panel of experts on intelligence, technology and civil liberties to discuss the implications for law enforcement, national security, privacy and personal freedoms. Apple would gladly participate in such an effort.

People trust Apple to keep their data safe, and that data is an increasingly important part of everyone’s lives. You do an incredible job protecting them with the features we design into our products. Thank you.

Read next: Facebook's AI-created maps will help bring the rest of the world online