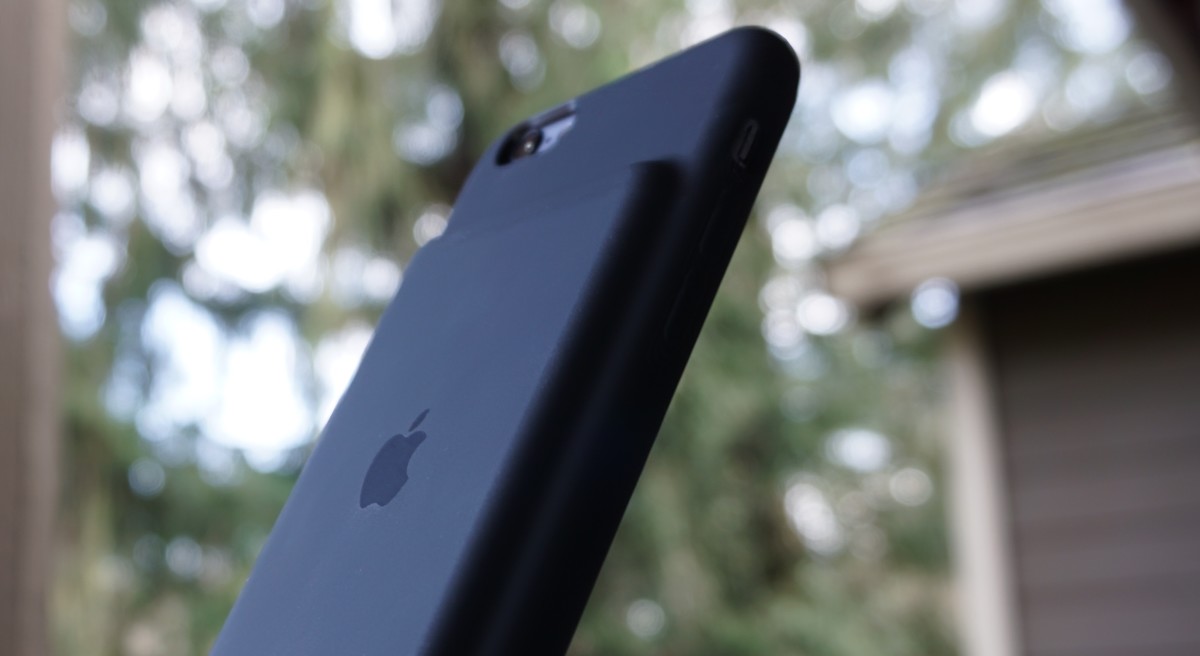 It’s a battery case, but it’s also a concession. In releasing its first Smart Battery Case, Apple is essentially saying battery life on the iPhone 6s could be better. It’s also saying a lot more.

If you took Apple’s silicone case and slapped a battery on it — then covered that in silicone — you’d have this case, more or less.

Because it has that battery pack, which needs to be charged just like your phone, the bottom of this case also sticks out. Apple has cutouts below to redirect the sound coming from the speaker forward, which is the same 90 degree turn the mic hole takes.

A pass-through for the audio jack is also present, and may not fit your favorite wired headset. Inside, it’s got a nice leather-y texture to protect your phone.

The top of the case bends back so your phone can slide down into it. Inside, a small indicator light shows you how charged the case is if you plug it in without the phone inside.

Some are calling the design a ‘failure,’ but that’s a bit of a misnomer. It’s more svelte than many other battery cases, and while not as linear and sexy as some other Apple products, it’s still really nice.

The reason Apple calls this one a ‘smart’ case is that it shows up on your Today widget screen. When you charge the case while it’s on your phone, the lock screen displays both your phone’s charge and how much juice the case has, too.

If you charge the case/phone with a computer that has an output of 10W, or a charger with a 12W output, the two charge simultaneously. If you’re plugged in normally, the case allows your phone to charge before it starts sniping juice from an outlet.

The case also has a passive coupled antenna so you don’t compromise your signal strength. That was a good bit of foresight, all things considered.

All day to play and then some

Like most Apple products, the Smart Battery Case wants you to let it do its thing. You can’t choose when your phone is or isn’t charging via the case — it just makes sure your phone has enough juice.

Though Apple doesn’t come out and say it, some outlets are reporting the case has a 1877mAh battery inside. Apple will say that it gives your phone 25 hours of talk time, 20 hours of HD video playback or 18 hours of Web browsing.

In my day with the case, I found it wanted to charge my phone when it was below 50 percent battery. I don’t have many issues with iPhone battery life as-is, so Tim Cook’s claim this is best used for overnighters rather than daily use applies to me.

The bulge around back is a bit strange, but the top actually hits my index finger just right, allowing me to cradle it with the tip of my finger. So in the hand, it’s great.

It doesn’t add much bulk or weight, either. If you hate battery cases because they’re clumsy, you’ll like this one. Even the bottom of the case is as minimal as possible.

When Mophie or others release a battery pack for your iPhone, it’s because that’s what they do. Apple didn’t need to produce this case, but they did. That probably means something.

Speculatively, I think this means the dimensions for the next iPhone won’t change. It’s a bit late in the game to sell a case if — in ten months time — you’ll be changing the dimensions of your flagship phone. This case also charges an iPhone 6, though it’s specifically marketed for the 6s.

I think it also means Apple is toying with other ‘smart’ accessories, or will open those smart features up to third parties. If you had a pair of Bluetooth headphones that could tell you their charge level on your pull-down widget, that would be awesome. Maybe I just tipped Beats’ hand, I don’t know; either way, that would be cool.

You can get a case with a larger battery elsewhere, and they’ll suit you just fine. Apple’s Smart Battery Case won’t charge your phone back to 100 percent from scratch, but it will manage your power for you. That’s pretty awesome if you just want to enjoy using your phone without worrying about the battery.

Some will throw shade at the $99 price point because they are thinking of Apple’s case as little more than a battery pack. But, the internal antennae is a nice touch, and I much prefer the silicone to any hard plastic shell from other manufacturers.

It looks like a bandaid — and is a bandaid for the iPhone’s battery life, just like any battery case is — but it may be the best bandaid you can put on your phone. Still, if you’re really into all-day performance without a battery case, the iPhone 6s Plus is one to consider.