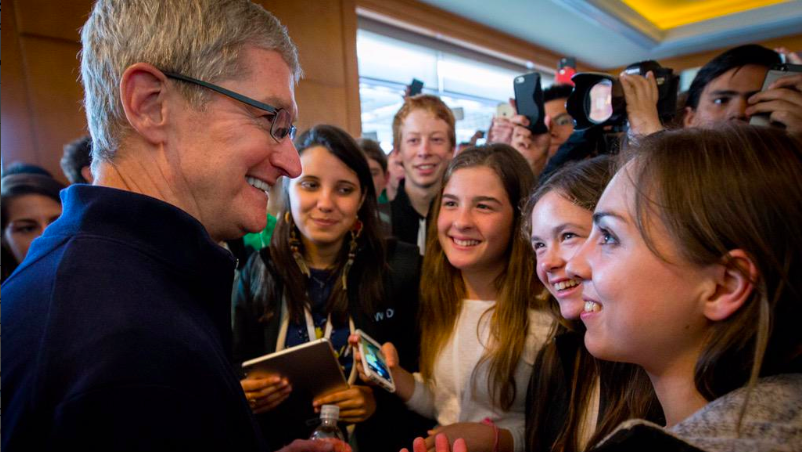 While Google’s keynotes at I/O featured a number of female presenters, Apple’s WWDC showcases have notably been sausage fests for some years. Now the company’s CEO Tim Cook says that’s going to change.

I’m incredibly impressed by these talented student scholarship winners. See you all tomorrow at #WWDC15 pic.twitter.com/LN1ZXmCqGf

After meeting with STEM students who’ve received WWDC scholarships, Cook was asked by Mashable about the lack of women on stage during keynotes. He replied: “Look tomorrow and let me know what you think.”

The only female member of Apple’s senior leadership team is former Burberry CEO Angela Ahrendts, who joined the company as Senior Vice President Retail and Online Stores in 2013. It’s likely she’ll take on the task of updating the world on how those stores are doing and perhaps noting that Apple Watch is about to hit retail.

The only other women in Apple’s executive team who could take to the stage are Lisa Jackson, its VP of environmental initiatives, who could tout its recent green projects, and Denise Young Smith, VP of HR, who’s very unlikely to hop up there any time soon.

Of course, Apple could also have invited female developers who present their apps during the keynote. It has done so before, but not nearly as frequently as their male counterparts.

The company has to do better and Cook is clearly aware of that. He told Mashable that increased diversity is “the future of [the] company” and admitted that the tech industry is to blame for the problem:

I think it’s our fault – ‘our’ meaning the whole tech community. I think in general we haven’t done enough to reach out and show young women that it’s cool to do it and how much fun it can be.

Read next: Why your brain wants to check Facebook every 31 seconds – and how you can stop it