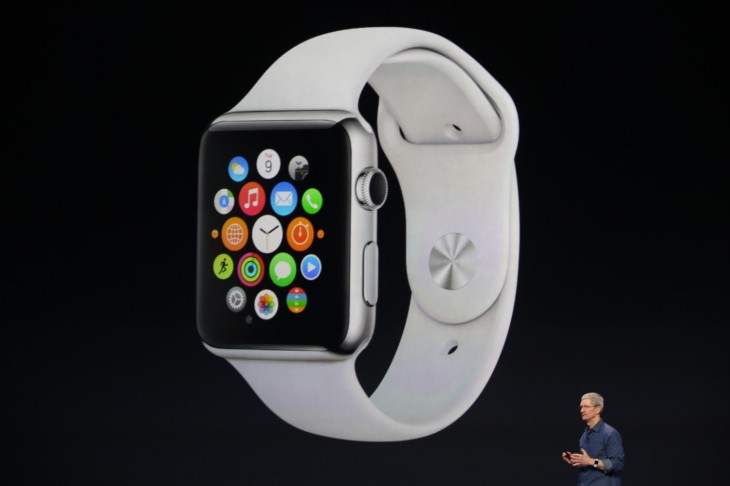 Apple unveiled the Apple Watch, its much-anticipated smartwatch at a media event in Cupertino today. Apple CEO Tim Cook described it as a “precise and customizable timepiece” and a “comprehensive health and fitness device.”

The device starts at $349 and will go on sale early next year. It comes in two sizes (38mm and 42mm) and has three different lines: Apple Watch, Apple Watch Sport and an 18k gold Apple Watch Edition.

You’ll need to pair the watch with an iPhone. The device supports iPhone 6, iPhone 6 Plus, iPhone 5s, iPhone 5C and iPhone 5.

In addition to a touchscreen, the Apple Watch includes a “digital crown” for interacting with the interface. You can use it to scroll through a list or zoom in on a map. Pressing the crown jumps you back to the home screen.

With the Apple Watch, Apple is diving into the fashion space. Cook noted that the device is “as much about personal technology as it is style and taste.” The company invited a number of style editors and publications to its event today, a departure from the usual focus on tech writers.

The watch knows when you’re raising your wrist to look at it and activates the screen. A Digital Touch feature lets you ping friends, draw on the touch screen and share your heart beat. Sensors on the back of the watch track your pulse. You’ll also be able to use the device to make payments using the new Apple Pay system.

As expected, Apple used a sapphire crystal display on the watch. The device measures force and provides haptic feedback through a “Taptic Engine.” When you send your heart beat to another Apple Watch user, the recipient’s watch will buzz in time with your pulse.

The charger on the Apple Watch uses a combination of the company’s MagSafe technology and inductive charging. Apple will include 11 watch faces with the device.

Apple has designed six different straps – made from leather, polymer, metal mesh and stainless steel – for the watch and included an interchangeable mechanism for switching between them.

Apps on the watch will be displayed as bubbles that you can rearrange on the homescreen. Using the crown, you can zoom in and out to different “neighborhood” of app icons. A “Glance” feature lets you swipe up to view customizable screens.

When replying to messages, the Apple Watch will intelligently generate quick replies based on the content of the incoming message. You can also send voice messages, dictate to Siri and create custom animated emojis.

Developers can use the WatchKit SDK to create “rich actionable notifications,” WatchKit apps and Glance widgets. For instance, Starwood has created an app that lets you unlock your hotel room by waving the watch in front of your door.

The watch includes two apps for motivating you to be more healthy. An Activity app monitors movement, calories burned, and time spent standing throughout the day, while a Workout app lets you set goals when you’re exercising.

The Apple Watch is the first new Apple product line that CEO Tim Cook has launched since he took over in 2012. Cook has been promising an “exciting” new product category for over a year now.

Check out our event page and liveblog to follow the latest news from Apple.

This story is developing. Please refresh for updates.