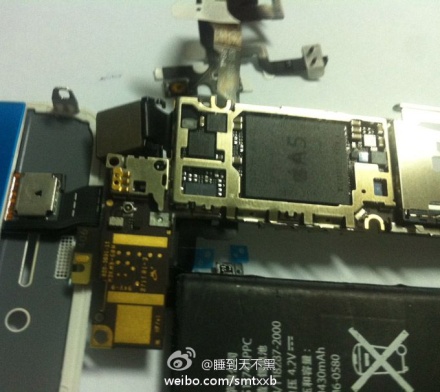 A new image has been posted on China’s Weibo social news site that shows a front panel, battery and processing chip of an iPhone. The parts that are displayed have led some to believe that what is being displayed is the upcoming iPhone 5, but we have our doubts. Update below.

The rumors of a less expensive, retooled iPhone 4 have gained such a volume that it is impossible to ignore. Even if it wasn’t redesigned, there is still a good chance that Apple would be keeping the iPhone 4 around to offer as a lower-cost device. It also stands to reason that if Apple felt that it could redesign the iPhone 4’s internals to produce it for a lower cost, then it would.

That’s why we have always been skeptical about the rumors of a new iPhone with no redesign. But whether or not this iPhone 4 is going to be the refined one that we should be seeing next month is in doubt.

It definitely seems that these parts could be from a new version of the iPhone 4, the A5 chip, which appears in the iPad 2 now definitely sounds reasonable. With over 9 million iPad 2s produced in the last quarter alone, all packing the A5 chip, Apple certainly has the manufacturing volumes up enough to swap out the A4 that currently powers the iPhone 4.

But this image shows a front panel that, while very much like the iPhone 4 we know today, actually resembles another prototype that we have seen in the wild previously. This one was photographed and posted on BGR and displays an enlarged proximity sensor grid that, in our opinion, would never make it to a final production iPhone.

Indeed in the officially released white iPhone 4, this grid was replaced by a single roundrect opening covered by an opaque panel. This prototype, labeled the ‘N94’, was apparently being used to test T-Mobile integration.

As far as the ‘enlarged LCD’ that some sites are talking about, I can tell you that’s just not true. Having had many iPhones apart over the years I can assure you that the rear panel of the iPhone always looks like that with the backing of the touch array and LCD assembly attached. Here’s an example image from another N94 prototype found by Macpost. This example also has the same 3.5″ screen that the current iPhone 4 does:

You may also remember these battery images that popped up just a few weeks ago from Macpost, which showed a series of shots that it claimed were from an ‘iPhone 5, but are clearly more along the lines of the N94 prototype.

You’ll notice that these batteries share the same 1430mAh rating as the one in the image above. Yes, I know the “1” is obscured above, but it’s highly doubtful that it could be any other integer.

These factors lead us to believe that this device is a retooled and refined iPhone 4. Either a prototype along the lines of the T-Mobile test unit, or a redesign that will make an appearance as a cheaper iPhone 4 next month. The grid shape on the front panel has us leaning towards an early prototype rather than any unit that is near completion, but there’s no way to tell for sure.

We would be willing to bet that this is not the iPhone 5 however, although like you, we will only know for sure once the announcement is made.

Update: Macpost has now added another shot confirming the battery and the fact that this is most likely a prototype of the iPhone 4 that is being redesigned for release as a secondary phone.

Read next: The Flight Card iPhone app is a beautiful way of checking your flight details