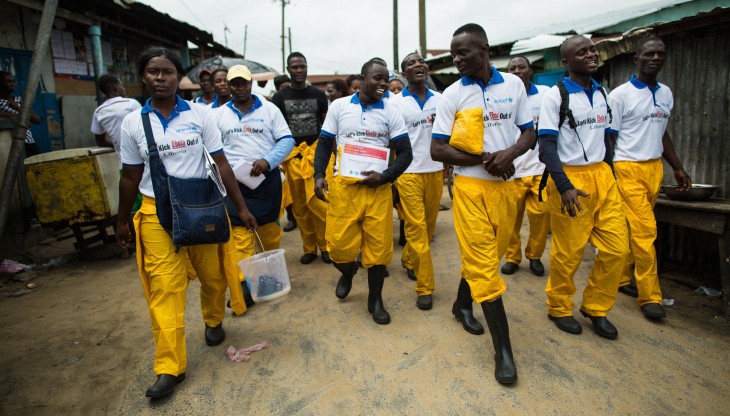 Nearly a year after the first case of Ebola was reported in West Africa, the epidemic still rages, having claimed more than 5,100 lives to date and acknowledged as the largest outbreak in history.

Local governments, international organizations and aid groups – to list but a few – are scrambling to put together a coherent and effective response to the crisis; both preventative and treatment-based.

One group making a significant contribution to the Ebola response – but with little publicity – are telecoms companies across Africa, who are leveraging their existing infrastructure, data, brand awareness and trust to provide information services to the public and practical assistance to aid groups on the ground.

A PSA via Vodaphone Ghana

One example of this is Vodafone Ghana, based in a country where the disease has been prevented to date. The response here was rapid and collaborative; leveraging the public’s trust in the Vodafone brand to push out vital prevention messages.

Prior to the Ebola outbreak, Vodafone Ghana was already operating a range of health related services, including a “dial a doctor” service with which members of the public can speak to a doctor at any time, community outreach and screening programs on the ground. It also offered customers an informative health app, as well as Q&A opportunities via Facebook.

Critically, the health services provided by Vodafone in Ghana are open to non-subscribers to use.

These services were quickly adapted to disseminate information about Ebola when the outbreak began, dial a doctor call center services were rapidly scaled and a weekly robot call provided information in five different languages.

“If you coordinate with what the government is doing, this can be a fantastic model for telcos [to help],” said Benedict Sumah, portfolio management specialist at Vodafone Ghana.

However, according to Jacob Korenblum, president and chief executive officer at SoukTel – which works with aid providers during global crisis situations – this has resulted in a confused over-the-top approach of near-spamming the public with contrasting Ebola-related information.

“There’s a tremendous duplication in what we do,” said Korenblum. “The sheer amount of information being pushed out to people right now is overwhelming.”

He added that organizations providing information via SMS in particular need to weigh up whether the information they are sending is relevant and useful, or just duplication.

“I cannot overstate the confusion even at the highest level, and the duplication.”

SoukTel has identified an alternative problem to response efforts in the Ebola crisis which telcos are ideally placed to address – namely, the lack of locational data regarding affected areas, often resulting in medical teams being unable to find infected individuals or infectious remains.

This is an area in which SoukTel believes mobile technology has a key role to play, by leveraging GPS data and satellite imagery to help medical teams locate target individuals’ homes.

Further, with this data, companies can create heat maps of where communities congregate, allowing aid providers to target prevention information to these popular public areas for a more effective response.

Linus Bengtsson of Flowminder agrees that the mapping potential of mobile is critical to the Ebola response, but according to Bengtsson, it is anonymized mobile data which can be of particular use.

Flowminder uses anonymous mobile data to understand the spread of infectious diseases, by mapping the movement of people through the location of mobile towers to which their devices connect.

“You see a large redistribution of people after a crisis,” Bengtsson said, noting that this “mobility modeling” can help medical and epidemic specialists prepare their responses.

But is it a long-term solution?

Vice President for VAS at Airtel Nigeria Francis Ebuehi said mobile is only one method of getting through to the populations of affected areas, and definitely not the most effective method.

“To be frank… not everyone is literate, and they’d rather go to a hospital to get information,” he said. “What had a real impact actually was radio and TV.” Ebuehi added that SMS was attempted, but to limited success.

While eager to contribute to efforts, mobile experts agree tech-based efforts can only complement the work of medical institutions.

“You need to be honest that mobile is not going to solve this. It’s about getting people to clinics, so you can support,” Bengtsson said.

Mobile may not be the solution, but it’s a catalyst that can raise awareness and educate people on resources for help.

Read next: “I Am Alive”: The role of apps in disaster relief