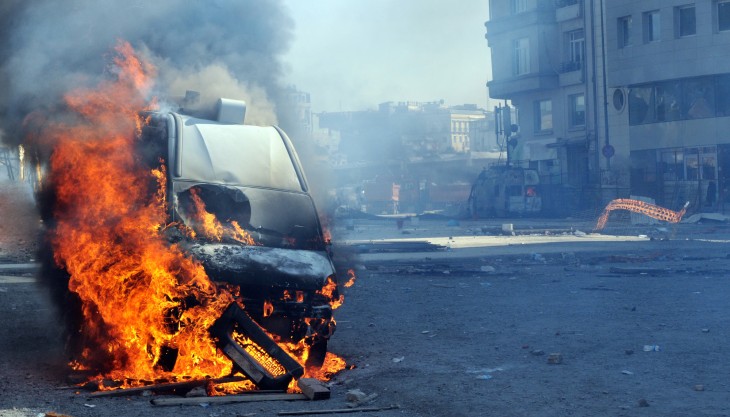 It was the seventh such attack throughout Lebanon in six months. And Sandra Hassan had had enough.

“I am currently in Paris pursuing a master’s degree in Public Health, and I have a few Lebanese friends here as well,” Hassan, a 27-year-old Lebanese native, explains.

“Whenever we heard of an explosion, our hearts would sink and we’d rush to our phones and computers to contact our families and friends. It seemed absurd that the reality we were living in led us to worry about our loved ones’ safety every other day. I felt helpless and incredibly frustrated.”

A few weeks after that blast, Hassan’s frustration had turned to action. On January 21, the full-time student and freelance developer launched her latest project, “I Am Alive,” in the Google Play store.

Once the app is installed, users can connect to Twitter or Facebook and modify the message displayed on the main screen. The tap of a button allows users to send the message, “#Lebanon #IAmAlive” through their social media accounts.

The app’s internal network also allows users to see which contacts have updated their status within the past hour, so they can direct concern to those who remain unaccounted for.

“When I started working on it, I realized that it could, in fact, be practical, especially since phone lines are usually down after an explosion or similar event,” Hassan says. “The app consumes very little data, and can function even on Edge. Rather than placing a call, [the app] could also play a role in reducing the amount of stress that is put on phone lines as people try to get in touch with one another, potentially freeing up the lines for those who urgently need to place a call.”

Hassan’s personal project quickly became a lifeline for others in her shoes. Three weeks and two more bombings later, the app had been downloaded 4,000 times and used regularly by dozens. Hassan began receiving requests for expansion almost instantly.

Initially connecting just to Twitter, the app’s integration with Facebook came in an update after users expressed need. She also heard from strangers in Egypt and Pakistan asking that the app be extended to their countries. Today, “I Am Alive” had been downloaded almost 7,000 times throughout 25 countries at a steady rate of five to 10 downloads per day.

“The application doesn’t have cultural implications, and can be used in crises globally,” Hassan says. “I’ve learned so much from the people who have emailed me feedback. Some are using the app because they live in violent areas, others because their families are spread across different countries and it’s an easy way to know that everyone is okay. And since the link to social media is optional in the newer version, more people are using it privately.”

Apps and the global crises

“I Am Alive” is in good (if sinister) company. The spill of Syrian violence into Lebanon has inspired the launch of several other apps to avoid direct danger. Last September, the Lebanese Army created “LAF Shield” for iOS and Android. The all-Arabic app helps users report diverse types of crime, access emergency numbers and more.

“Way to Safety,” an app in development by Lebanese Engineer Firas Wazneh, uses crowd-infrastructure to ID sources of gunfire, allowing users to steer clear. And “Happin!”, a crowd-sourced app that feeds user tips regarding roadblocks, protests and more into an interactive map, has been downloaded more than 80,000 times.

The Web has long been used to connect users in times of sudden crisis. But as the 21st century has moved forward, the marriage of mobile with social networks allows users to connect with loved ones and authorities through native apps.

Amidst preparations for the May 19 Webby Awards, Executive Director David-Michel Davies reflects on how winners from years past have played a crucial role in crisis communications.

“In 2004, when the horrific Tsunami flooded much of South East Asia and India, we saw Webby winners like Movable Type, Live Journal, Blogger and Flickr play an immense role as individual photo and video bloggers turned to blogging platforms to inform the world about what was going on,” Davies tells us.

“And certainly, in more recent conflicts and tragedies during the uprisings in Egypt, Tunisia just a few years ago, Webby winners Facebook and Twitter were important platforms for both the organization of the protests [and] as a place where families checked in and kept track of loved ones.”

Davies applauds “I Am Alive” and the value it brings to users who need it. He also imagines how it heralds a new “internet of things” ecosystem. If we already monitor our loved ones in real time, how long will it be before our physical health is monitored as often and as closely? If we now have the technology to warn us of immediate danger, will we monitor our bodies in real time as well?

Davies says it’s not a question of if, but when.

“Imagine in ten years when we are monitoring our bodies in real-time, where some sensor or device is literally tracking your heart rate every second of the day,” he hypothesizes. “The main driver of that technology will probably be healthcare concerns: living longer, being more fit, etc.

“But an incidental effect is that you can easily imagine having a dashboard at home or on your smartphone or tablet with your family’s heart rates all displayed in real-time. So the service provided by ‘I Am Alive’ today becomes a feature within a greater platform of health services.”

Focusing on the greater good

Hassan is currently collaborating with International Crisis Watch, or Observatoire International des Crises. ICW Analyst Natalie Maroun confirmed to The Next Web that the anti-conflict NGO is keen help Hassan develop a business model. Hassan insists that regardless of expansion, the app will remain ad free. However, she does plan to seek external funding to expand “I Am Alive” to platforms beyond Android.

But who will these VCs be? Hassan is the first to point out that her app has inherent social value, but no easy way to make money; she doesn’t expect a Series A round from Sequoia.

But amidst assertions that navel-gazing has replaced the region’s “change the world” mantra, “I Am Alive” could be the bare bones value venture to help the Valley expand beyond solving what Slate reporter Amanda Hess calls “petty problems.”

“I know that the companies in Silicon Valley have a lot of resources and infrastructure available to them that could be used to put together a similar app with much more reach…[but] since there is no money-making angle to the idea, I don’t know how motivated Silicon Valley would be to develop it,” Hassan says.

“Also, it was easier for me to conceive of the idea as I was affected by the situation personally and [it was] more relevant for me to tackle.”

Over in NYC, a world away from such conflict, Davies concurs.

“Anything is possible, he allows, “but in general, the cliché that ‘necessity is the mother of invention’ is largely true!”

Read next: Tumblr, Tomfoolery, and 12 months of Yahoo acquisitions