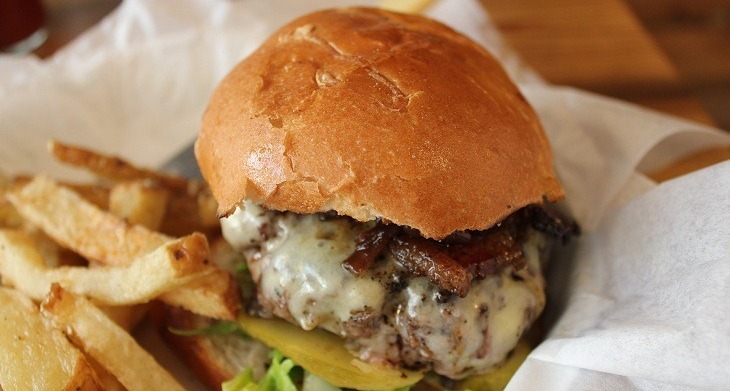 Sequels are often awful. I’m thinking Men in Black 2, Jaws: The Revenge, Police Academy 7…you get the picture. That said, they’re not always bad – think Godfather 2, Back to the Future 2 and, erm, Bill & Ted’s Bogus Journey. Films are one thing though…what about apps?

Back in August we wrote about a pretty niche curated app which helps Londoners find the best sandwiches in town. And today, creators Duane and Natalie Kinsey have announced their follow-up – Best Burgers London, and The Next Web has some invites to get the app for free.

So how does the app help you find the best burgers?

As a curated app, Duane and Natalie personally visited each of the burger joints themselves to test. And if you’re not from London, or find yourself in an unfamiliar part of the city, the geo-location functionality guides you to the nearest quality burger cafe, bar or restaurant. It’s probably also worth noting that the likes of McDonald’s and Burger King have been given a wide berth with this app.

Where to now for the foodies?

Just to recap from our previous coverage, Duane and Natalie Kinsey are founders of an Australian design studio called Logobird. They recently moved to London to experience life in the UK. And, during the transitional period of the move, they’re taking some time off client work to focus on personal projects such as this. So with number 2 out the way, can we expect to see a whole bunch of sequels a la Death Wish or Scream?

“There are currently no plans for any more Best London apps”, says Duane. “However, I wouldn’t rule it out. We are currently in negotiations with our developer about developing a version for the iPad, as well as rolling out the app on Android”.

It’s been almost two months since their sandwiches app launched for £1.49 per download, so I asked them how it’s gone so far. “The sandwich app has done just over 2,500 downloads. That number isn’t huge, however it’s a niche app in a limited market”, says Duane. “We are currently averaging 15 sales per day. Again, not huge but if downloads remain at this rate and we end up selling 5,000-6,000 over the course of a year, that’s a good result. Regardless, the app was never about making huge amounts of money, we made it to learn the business of making iOS apps and to provide as much value as possible to our target end users”.

Duane and Natalie spent months researching and sampling countless cafes, restaurants and pubs. “As we tend to eat out a lot, it hasn’t been all that difficult”, says Duane. “Since launching the first app, we’ve had a ton of great suggestions from end-users too”.

The app is a mere £0.69 from the App Store, but Duane and Natalie have 10 free promo codes to give away if you prefer not to spend. Simply send an email to: [email protected]bestburgerslondon.co.uk, and they will choose email addresses at random to send the codes to. Entries close at midnight (BST) tonight (12th October).