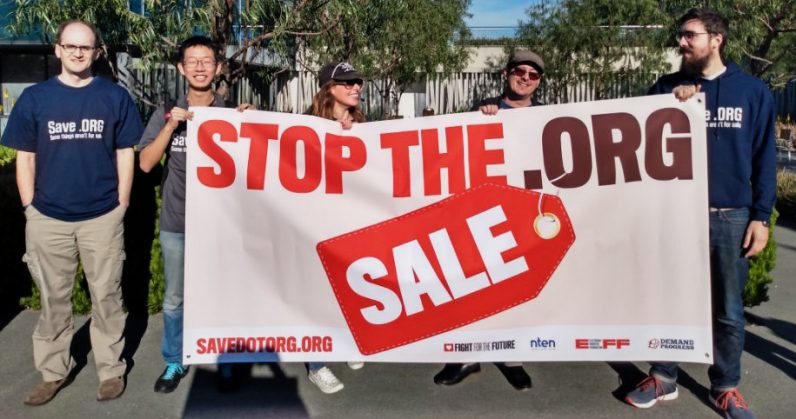 ICANN, the non-profit that manages namespaces on the internet, announced today that it’s blocking the controversial sale of the .org registry to private equity firm Ethos Captial.

It said the sale would’ve caused “unacceptable uncertainty” over the future of the world’s third-largest domain registry, which is largely used by non-profit organizations.

In a blog post, the organization said it’s dedicated to making the right decision to ensure the stable and secure operation of the Internet’s unique identifier systems:

ICANN‘s role is to ensure the stable and secure operation of the Internet’s unique identifier systems. We are dedicated to making the right decision, knowing that whatever we decide will be well received by some, and not by others. It is our responsibility to weigh all factors from anICANNBylaws and policies perspective, including considering the global public interest. We have done this diligently, ensuring as much transparency as possible and welcoming input from stakeholders throughout.

BREAKING: ICANN has voted to REJECT the sale of the .ORG registry to private equity firm Ethos Capital. This is a major victory for the millions of nonprofits, civil society organizations, and individuals who make .ORG their home online. #SaveDotOrg https://t.co/K2qk85c3Ug pic.twitter.com/sFLcwZqU1B

Last November, Public Interest Registry (PIR), an organization that operated .org, said that it was handing over control of the .org top-level domain (TLD) to a private company named Ethos Capital. The private firm planned to pay $1 billion in endowments to PIR as part of this deal. This move came after ICANN’s announcement in June to remove all price caps on the .org domain.

[Read: Please don’t let Assassin’s Creed Valhalla be too much like Odyssey]

The move was heavily criticized the world over, by the likes of privacy-focused organizations like the Electronic Frontier Foundation (EFF) and World Wide Web inventor Sir Tim Berners-Lee. Several of these opposers also created a site called savedotorg.org, appealing to ICANN to stop the sale.

I'm very concerned about the sale of .org to a private company. If the Public Interest Registry ends up not being required to act in the public interest, it would be a travesty. We need an urgent explanation. #SaveDotOrg

ICANN said today that the sale would’ve forced PIR to serve the interest of the domain-holding corporate instead of a wider public community. EFF said this is “a victory for aid organizations, corporate watchdogs, museums, clubs, and everyone working in the public interest.”

You can read ICANN’s full announcement about the decision here.

Read next: 3 reasons why working from bed is actually good for productivity