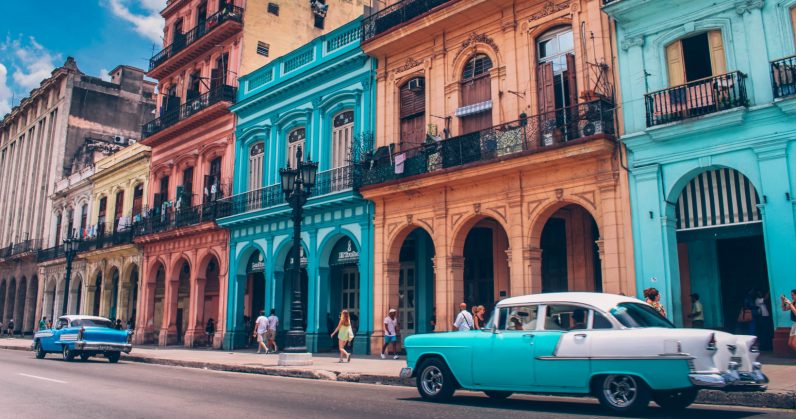 Yesterday, Google announced it’s teaming up with Cuba’s telecommunications monopoly, ETECSA, in order to bring faster Internet access to the island. The news is no doubt a relief for Cuba’s citizenry, who have to endure high Internet costs and excruciatingly slow speeds. These factors combine to give Cuba one of the lowest Internet penetration rates in the Western hemisphere.

But why is a middle-income country, situated within spitting distance of the United States, a digital dead-zone? The answer is actually fairly interesting and involves a number of factors.

There’s a massive network of undersea fiber optic cables in the ocean. These connect disparate locales, ferrying bits and bytes at the speed of light. Just to give you a sense of how important these are, according to a 2017 report published by the UK-based think tank Policy Exchange, submarine cables were responsible for carrying around 97 percent of the world’s communication traffic.

Most countries with a maritime border are connected to several undersea cables. The first reason for this is redundancy: if one breaks (which happens often), there’s a backup. More cables means you’re able to transmit more traffic, too, which is essential if you’ve got a data-hungry populace.

Cuba is connected to just one cable. In 2013, the country activated a $70 million, 1,600 kilometer (994 mile) pipeline to Venezuela. Prior to that, it relied on excruciatingly expensive satellite connections, which cost a small fortune to operate, and offered limited bandwidth. This all but kept the Internet out of the hands of everyone, except a handful of elites.

So, now you’re probably wondering why Cuba’s so behind the times. The answer, of course, involves politics.

For a tiny country of just over 11 million in the Caribbean, Cuba played an oversized role in the Cold War. Remember the Cuban Missile Crisis? The clue is in the name.

The past 60 years of Cuba’s history has been centered around a deep-seated animosity with the nearest superpower – the US. In an attempt to stymie the only outpost of communism in North America, America placed Cuba under a crushing embargo that prevented it from doing business with the outside world.

For a really long time, American companies couldn’t sell telecommunications equipment to Cuba. It’s worth remembering that American firms dominate the tech world, and it’s almost impossible to have any sort of infrastructure without any US-origin parts (although is likely getting easier, thanks to the rise of China as a tech giant in its own right).

Thankfully, that restriction was lifted by President Obama in 2009, as tensions between the two countries thawed. It remains to be seen what changes Trump’s presidency will mean for the effort to connect Cuba to the Internet, however.

It’s not just America. As an authoritarian regime with an abysmal human rights record, Cuba’s got an incentive to keep its citizens offline, and regularly harasses and arrests digital dissidents. Reporters Without Borders calls the nation an “Internet Enemy,” putting in the same list as North Korea, Syria, and Iran.

The censorship manifests itself in a really interesting way. While there’s not much actual site-level blocking, Cuba does surveil its citizens online. You could also make a convincing case that the country has deliberately rationed access in order to keep it out of the hands of the masses.

In December 2009, Cuba arrested a US citizen, Alan Gross, after he smuggled Internet equipment into the country, destined for the nation’s tiny Jewish community. Gross would spend six years incarcerated before eventually being released in 2014.

And here we are.

Let’s go back to Google. There’s currently no hard timeframe for when Cubans will get faster access to the likes of YouTube, Search, and Google Play. According to Reuters, engineers from Google and ETECSA will work together to find a solution. Overall, the details are thin on the ground, but it seems like Google’s advocating for a “peering agreement,” where ETECSA has a direct line to Google’s infrastructure.

This would lower costs, as Cubans wouldn’t have to pay in order to access Google via an intermediary network. It’ll also offer markedly faster access. However, it’ll undoubtedly require new submarine infrastructure. Cuba will either have to connect to one of Google’s “points of presence.” The nearest ones to Havana are in Florida, Mexico, and Colombia.

But make no mistake, solving Cuba’s Internet woes won’t just be solved by thicker pipelines and faster routers. This isn’t just a technical problem. A good deal of diplomacy is required, too.

Given the history of the country, you can be forgiven for wondering how we ended up in a position where a communist monopoly is teaming up with Google. The reality is that Cuba’s arrival on the Internet stage may have been severely delayed, but it’s certainly been rapid.

Internet cafés were followed by public Wi-Fi hotspots, and since December, Cuba’s had widespread mobile Internet. Around two million people, or about 18 percent of the country, now pays for 3G internet, which they access through their smartphones. And that’s before we get into the phenomenon of mesh networks and “el paquete semanal” – shared USB drives packed with clandestine content, like cached websites and telenovellas.

Ultimately, this story tells us that the Internet is a bell that cannot be un-rung. If you give people a sip, they’ll want to drink the whole glass.