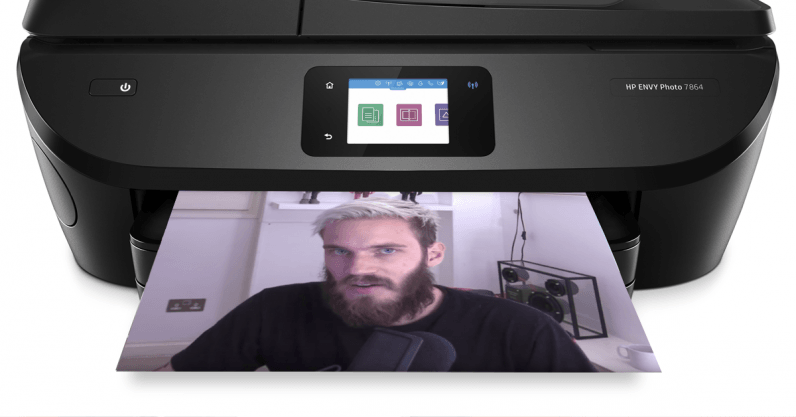 The battle for YouTube supremacy between Swedish vlogger PewDiePie and Indian record label T-Series is getting more intense than you could imagine: In order to give PewDiePie an edge, someone hacked 50,000 printers around the world to ask people to subscribe to the Swede’s channel, and unsubscribe from T-Series.

Plenty of people tweeted images of the printed message, which explained how PewDiePie is set to lose his position on YouTube as the channel with the largest subscriber base, to an Indian company called T-Series, which only uploads movie trailers and songs. It also urged people to subscribe to PewDiePie’s channel and spread awareness by using the hashtag #SavePewDiePie in their social media messaging

Why are local printers being hacked for this pic.twitter.com/fAnNTIp6ds

So this just randomly printed on one of our work printers. I think @pewdiepie has hacked our systems. pic.twitter.com/wSG9cprJ4s

A person, who goes by the pseudonym TheHackerGiraffe, found a repository of 800,000 open printers on Shodan.io – a search engine to find out devices connected to the internet. He took over 50,000 of them and sent out a command to print his message. As if that wasn’t scary enough, he said that it just took him 30 minutes to learn, code, and take control of the printers.

“People underestimate how easy a malicious hacker could have used a vulnerability like this to cause major havoc,” TheHackerGiraffe told The Verge. “Hackers could have stolen files, installed malware, caused physical damage to the printers and even use the printer as a foothold into the inner network.

Spread the word with your friends about printers and printer security! This is actually a scary matter. Will tweet everything about this entire #pewdiepie hack later to explain to everyone exactly what went down. Also @pewdiepie please notice me

The subscriber war between PewDiePie and T-Series started a few months ago when the Indian music company’s channel saw rapid growth in numbers to reach 59 million subscribers. In October, the two channels were neck and neck, as more people joined T-Series’ channel, which isn’t surprising – sure, PewDiePie is big, but Bollywood music has tremendous appeal worldwide too. PewDiePie’s fans subsequently started several campaigns (some more kooky than others) to help their king keep his crown:

At the time of writing, both PewDiePie and T-Series had breached the mark of 73 million subscribers.

Or maybe not.. The gap was down under 16k but now is 69k and growing. If you keep getting boosts like this you may still be able to make it until 2019. Either way congratulations on making it this far & 73M subs today!https://t.co/Jc7fYQYdh3 pic.twitter.com/Xhy9ZBe091

It’s hard to say if this war will come to an end soon – it’d require either channel to gain a major lead over its rival so they’re millions of subscribers apart. May the best entertainment franchise win.

Read next: Report: Apple AirPods may get wireless charging in 2019, and a new model in 2020