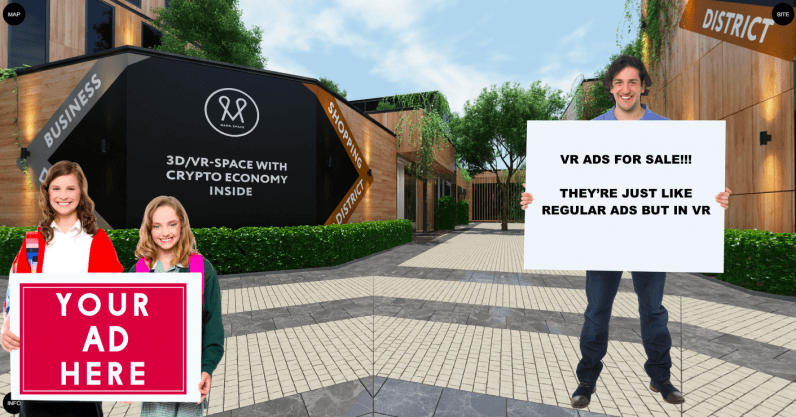 For anyone who’s paying attention, it won’t come as a surprise that virtual reality (VR) is on the verge of becoming mainstream.

Variety recently cited the Greenlight Insight’s report which forecasted VR revenues to total $75 billion by 2021. According to the same report, VR revenues were projected to reach $7.17 billion by the end of 2017. Which is why it’s important that businesses both small and large consider early exposure to this growing segment.

Promising statistics, but how can business owners put this information to good use?

MARK.SPACE, a blockchain-powered platform that allows for the creation of 3D websites compatible with VR, poses an interesting solution. MARK.SPACE  aims to become the powerhouse of the next generation of VR internet.

MARK.SPACE provides businesses and others with a tool to launch any type of 3D or VR project based on the ‘real world’ economy. Users will be able to create environments where they can carry out activities, such as selling customized furniture or decor. In addition, they can create their own ‘offices’ and in a city-like virtual environment, advertisers can take advantage of spaces like hoardings in common areas.

The project uses ‘M1 technology’, which is based on ‘advanced mathematical algorithms’ that MARK.SPACE developed in order to give the best possible precision in 3D visualisation. The VR platform is able to digitize entire interiors and product lines of shopping malls complete with branded stores.

Users will be able to create their own social VR environments as well. MARK.SPACE has created a working platform prototype that will support content like YouTube videos, Instagram posts as well as audio and text files.

Tokenization of the virtual space

The VR environment created by MARK.SPACE consists of ‘Cities;’ including districts, blocks and units. The bridge between the virtual and the real world economy is the MRK token, which is the internal currency of the platform. This token will allow users to purchase and sell physical goods as well as services on the MARK.SPACE platform.

Also, it enables users to create their own spaces and to customize them. In order to expand the capabilities of the platform, more funding is needed. Therefore, the company is organizing a phased token sale.

Currently, the fourth round of the sale is being held, which started on February 15, 2018 and has already raised $9.12 million at the time of the writing of this article. The price of each MRT token during this round has been set at $0.10. There is a hard cap of $35 million. A whitepaper with details of the sale as well as the project has been released by MARK.SPACE.

Fostering creativity from the get go

MARK.SPACE recently announced a real estate contest to select the ‘Best Apartment’ on the platform, meaning all registered users can design a 3D or VR location from scratch to compete.

The contest will allow users to experience the VR platform and illustrate its convenience and usefulness. It will stay open until February 28, 2018, when the main token sale ends.