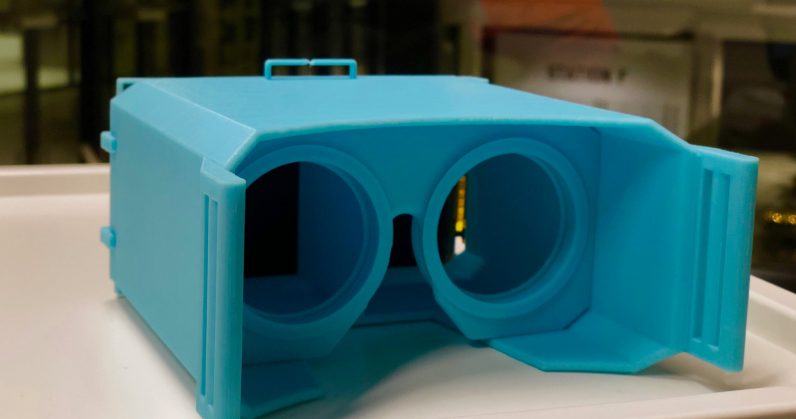 Palmer Luckey, the founder of Oculus and the inventor of arguably the most successful commercial virtual reality headset, was only 17 when he completed his first prototype for the device. Fast-forward to the present day, and Luckey is now worth roughly $750 million at the age of 25, having sold his company to Facebook.

16-year-old Maxime Coutte’s story has something in common with Luckey’s beginnings, in that he set out at an early age to build the hardware needed to enjoy VR experiences, and appears to have the same sort of tenacity and passion for technology as the inventor whose footsteps he’s following in.

But the similarities end there; Coutte took up the project because his interest in VR was piqued by the virtual reality-focused anime series Sword Art Online. Finding himself unable to afford an Oculus Rift of his own at 13, he sought out the help of a couple of friends and his math teacher in the village of Savins in northern France, where he grew up.

Now, Coutte has not only crafted a working VR headset that allows him to play SteamVR games, but also open sourced the tech behind it so anyone can make their own and improve upon it as they see fit. I found his story fascinating, and was delighted to learn more about his journey from halfway around the world.

The result is a 3D printed headset equipped with a  5.5-inch 2,560 x 1,440 pixel LCD screen that allows for a 90-degree field of view. Coutte has paired it with Leap Motion’s hand tracking device to detect and mirror arm movements for aiming and other functions in games, and said that the headset will work with SteamVR-compatible content.

Coutte recalls getting started with VR at school, as part of a special interest group at school:

I started programming when I was 13, thanks to Sensei (Coutte’s math teacher at the Collège Lelorgne de Savigny middle school in Provins, Jerome Dieudonne), who created a robotics club with our school’s backing. On the first day there, it hosted 12 students; the next week we were down to just three of us.

At the time, I was hugely into this anime called Sword Art Online, in which the protagonist, Kirito, using a VR headset, is plunged into a role playing video game. I was fascinated by the idea of a second reality in VR and I wanted to experience it. I spoke with one of my fellow club members, Gabriel Combe, about how I couldn’t afford a VR headset, and we both agreed that we should build our own.

That got us into the math and physics behind VR (quaternions, proper acceleration, and antiderivatives). Then, we bought the cheapest components we could and we reinvented VR. Now, using our FastVR and Relativ tools, you can build your VR headset too.

Coutte wasn’t deterred by the lack of easy access to resources in his village, or by his lack of experience in building hardware:

Every piece of knowledge one would need for such a project is online. From math courses, to electronics tutorials and cheap components, all the knowledge and prerequisites are free and at our fingertips. And by building it from scratch, with all the fresh know-how available to us in 2017, we avoided common assumptions and challenges associated with VR technology back in 2013.

Together with Combe, Sensei, and their friend Jonas Ceccon – who sourced parts including lenses and the screen from suppliers in China – the foursome formed a team to participate in a robotics competition, and began work on their mammoth project:

When we started working on the VR headset we had no idea of how to build it. I started with the most basics things, like how we would track player movements, and those questions led us to the math behind components such as the accelerometer. As we progressed in answering our questions, our next steps became clear and we kept at it.

The most difficult part was to make it compatible with every existent SteamVR game. We still struggle with this. The easiest part of our project was to release a first prototype of the headset core that handles the fundamental processes of displaying VR content, after having mastered the key concepts behind VR – the first one was coded in just six nights.

In the process, Coutte and his team realized that simply building the hardware and getting it to work wouldn’t be enough to ensure smooth performance in VR experiences. So Coutté came up with a solution that he called WRMHL, to enable quick communication between the Arduino hardware platform and the Unity3D engine. He explained that this made it possible to reduce latency by a great deal by reducing computations on the headset and pushing them to the connected PC instead, and it worked well given that the team was using low-cost components.

Instead of trying to beat million-dollar companies at their own game, the team decided to focus on working within a budget of just $100. Coutté explained:

Every choice has been made in the perspective of this constraint, and it led us to build more and more things by ourselves to see how we can stretch our budget.

For instance, we needed to solve latency issues that we faced when using low-powered components – and so I came up with WRHML. This mindset of building from the ground up help us build an easily hackable VR headset and development kit for building games.

The latter came about when Coutte met a team of game developers who had one person on their team dedicated solely to making the title compatible with VR headsets. That sparked the idea of creating FastVR with Combe; the tool lets devs make their standard Unity-based PC games VR-ready, simply by dragging and dropping the FastVR package into their build and setting it up through a quick configuration process.

Coutte is all too aware of the fact that his creation may not match up to the design, build quality, or performance of the latest high-end VR headsets on the market today – but that hasn’t deterred him from sticking with the project. In fact, it’s led to an interesting development:

Of course, our headset is ugly, and hard to setup. But I’m confident that the community we are building will help improve this.

The community he speaks of is a small army of followers who interact with his team on GitHub and Discord, as the entire Relativ project is open-source. “Building a company felt like overkill, considering our age and the pain of starting a firm,” he explained. “Our goal is simply to have fun and to help democratize VR. The best way to do it was to open-source it.”

The idea to open-source the entire project came from Oculus’ chief architect, Atman Binstock, who Coutté met in San Francisco through Oussama Ammar, co-founder of the European startup accelerator The Family.

Ammar recounts hearing from Coutte a year ago through a cold email. “It was just a short email claiming that he could build a better VR headset than Oculus,” he told TNW, and mentioned that when he realized Coutte’s intention was to build a company, he felt bad for him.

We come from the same background (coming from a small town, for instance), and I created my first company as a teenager. I know how painful it is at that age to manage “company problems,” and I don’t think you should start too early, because it decreases your chances of just learning, right at the age when your learning can be the most intense. So I told Max that if he’d agree not to build a company yet, but to open source his project, I’d be happy to mentor him. Plus, since I go to Silicon Valley every summer, he could come with me and I’d show him around. I think being in Silicon Valley does two big things: it gives you a sense of purpose and it shows you that it’s not unique to be really talented. Those are two very important, humbling experiences.

Ammar explained that the trip to Silicon Valley was an eye-opener for Coutte:

At that moment, I don’t think Maxime totally understood why I was against helping him to build a company, but the corruption of that first trip to the Valley did the trick. When we arrived in SV, David Marcus (Vice President of Messaging Products at Facebook)  introduced me to Atman, and during that meeting with Atman something funny happened.

He told Max that what he is doing is great, but that managing hardware, supply chains, etc., is all a huge pain. And he said that what would be cool is for Max to build a reputation and a bit of a brand by offering all of this to the rest of the world. It will give him a taste of management, and a certain kind of entrepreneurial experience that Max craves, but without the usual business headaches of running a company.

Maxime was super enthusiastic to have someone who really understood the tech he was working on giving him the same advice as I had. And as the trip went on, probably 90 percent of the entrepreneurs he met, and especially those who had started out really young, gave him the same advice. Max came back to France super inspired, and open-sourced the project.

After he returned to France, he rewrote the entire codebase for the project over the course of five months, convinced his team and Sensei to go open-source with it, and then published it on GitHub for others to dissect, download, and learn from.

The Discord channel is rife with some 200 people sharing links to tutorials, projects, and ideas about DIY VR gear, frameworks for development and plans for improving on the original Relativ build. Coutte is also working with a team from among the community on a companion app for the headset. “By having lots of people from different backgrounds and with different visions, we could push the project far beyond what our four-member team has achieved so far,” he explained.

The internet has certainly made it easier than ever to access knowledge and learn how complex systems like virtual reality gear work. But with Relativ, Coutte has turned his passion for technology – and Sword Art Online – into something much bigger, that others from around the world can participate in.

Update (February 8, 2019): The spelling of Maxime Coutte’s last name has been changed from ‘Coutté’ as per his request today.

Read next: IOTA is vulnerable to replay attacks but has no intention of fixing the flaw