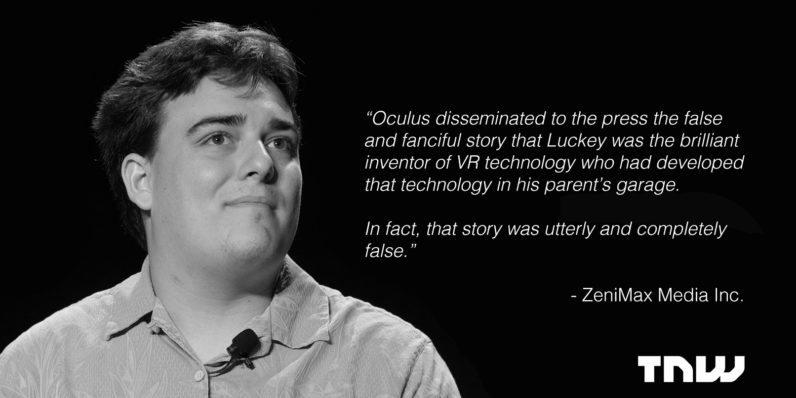 After purchasing Oculus just over two years ago, Facebook CEO Mark Zuckerberg is just beginning to reap the benefit. Oculus finds itself in the fortunate position of being an industry leader in a market that’s just beginning its ascent. It’s also about to appear in court over allegations of stolen technology and a false origin story.

The story spun by Oculus was of a young and ambitious hacker, Palmer Luckey, who pieced together a company on a shoestring budget that’s now one of the most valuable in the world. ZeniMax — the parent corporation for game studios like Bethesda, id, and others — tells a different tale. The lawsuit alleges the origin story released by Oculus was “disseminated to the press the false and fanciful story that Luckey was the brilliant inventor of VR technology who had developed that technology in his parent’s garage. In fact, that story was utterly and completely false.”

The company contends its own John Carmack — designer of huge titles like Doom and Quake — began correspondence with Luckey in 2012. The lawsuit describes Luckey’s headset as “primitive” and credits Carmack with making it a viable product. According to ZeniMax, Luckey’s ‘Rift’ was a “crude prototype that lacked a head mount, virtual-reality specific software, integrated motion sensors and other critical features and capabilities needed to create a viable product.”

Then Carmack left ZeniMax for greener pastures at Oculus.

Carmack claims his employment agreement allowed him to be involved with Oculus, as it wasn’t a direct competitor to ZeniMax. He goes on to claim he brought the idea to CEO Robert Altman in an attempt to manufacture and sell the device. The idea never gained steam. The company also declined to invest in early stage financing for Oculus — an investment that would have earned tens, or hundreds, of millions of dollars in return.

“Altman decided not to pursue the opportunity to make ZeniMax a player on the ground floor of the VR hardware revolution,” according to Carmack’s filing.

Before leaving for Oculus, ZeniMax claims, Carmack stole thousands of files from the company — files that were later used in the development of the Oculus Rift. It also claims Facebook knew of the stolen intellectual property before purchasing Oculus in 2014.

Facebook denies any wrongdoing and points to its August 2015 filing stating Carmack’s former employer made no claims to the technology or intellectual property rights until Facebook announced its intent to purchase Luckey’s company.

Jury selection started Monday, and ZeniMax is seeking a $2 billion payout from a panel of nine jurors — three men, and six women.

Read next: WhatsApp for Android now lets you search and send Giphy GIFs