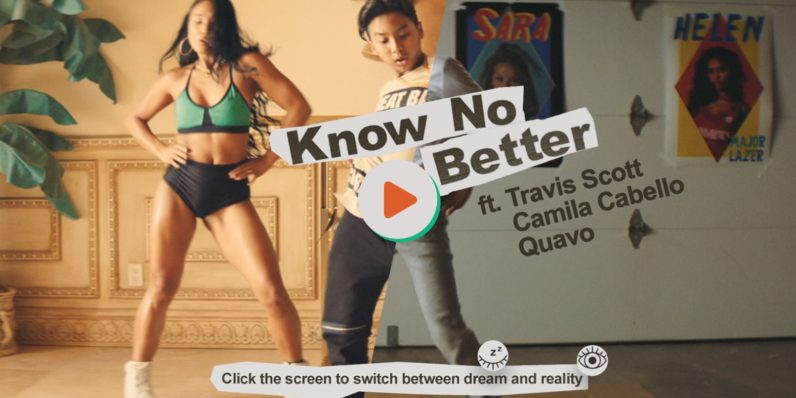 Major Lazer today released an interactive video for their new single “No Know Better.” The video allows the viewer to take part in the video, albeit in a very limited way.

In the original video, a young boy alternates between his dim reality and his sumptuous dream world. In the interactive version, the viewer alternates between the dream world and the real world at will by clicking on the video. They’re so committed to this concept, too, that if you don’t click to switch within a few seconds, the video will remind you.

The interactive version is hosted on Eko, a video site which aims to let “viewers shape the story as it unfolds.” Executive producer Lihu Roter says:

Eko’s unique interactivity enables creators to connect with viewers unlike any other digital platform, fostering deep emotional connections with audiences by giving them agency to affect stories in real-time. Major Lazer’s creative execution of this parallel story allows audiences to simultaneously step into the shoes of this young dreamer’s reality and his dreams themselves, experiencing his aspirations coming true with him in the moment.

I’d argue the video already does that in its linear YouTube form, but you do you, Lazer. Regardless, it’s a neat concept and I’d be curious to see how it could be used outside of this specific video.

Read next: Scientists are creating a cell phone battery that charges instantly