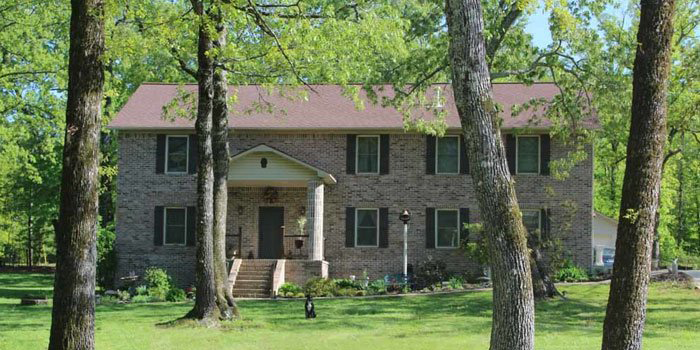 After leaving a violent partner in 2008, Cara Brookins and her four children needed a place to live. Short on funds, Brookins was determined to give each of her children a room of their own. So, she built them a house.

In her new book, ‘Rise, How a House Built a Family,’ Brookins details the struggle of erecting a house from the foundation up without any prior construction experience. Along the way she relied on information gained in YouTube tutorials and good old fashioned trial and error. According to Brookins:

With just a little bit at a time, we figured out how to lay a foundation block. There was a lot of asking people at Home Depot for help too.

Everything, in this sense means literally everything. Her oldest son Drew helped draw up the blueprint and get it approved by the city. Jada and Hope, her daughters, hauled water from a local pond to hand mix the concrete while cooking meals for the hungry crew of five, and looking after their younger brother, Roman.

It was 2008, so YouTube was comparatively basic to the platform it is now — and none of the Brookins’ owned a smartphone — but each night Cara consulted the website for singular tasks such as “how to frame a wall” and tried to remember what she could before applying it on the job site the next day. Nine months of hard work led to a home they’ve since named “Inkwell Manor,” a house that cost $130,000 to build and has since been appraised at over $500,000.

The home, in case you were wondering, passed the city building code inspection without issue.

How to rebuild your life: Incredible story of Arkansas mother of four who escaped domestic violence and then built her own half a million dollar home by watching YouTube tutorials on Daily Mail

Read next: This is what happens when Trump invites all of Facebook to his inauguration