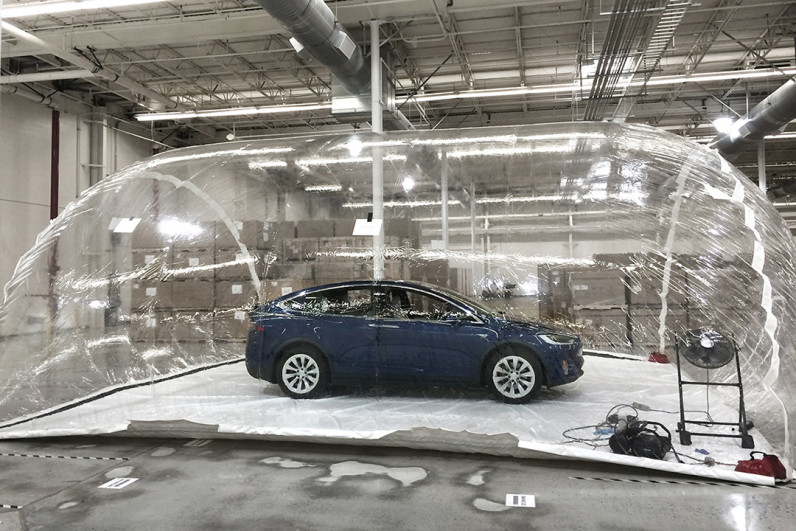 We’ve all slightly lost our faith in what carmakers say since that tiny emissions cheating thing by Volkswagen turned it into the new Samsung in the eyes of the tech world.

Well, in a bid to prove it’s no liar on its green creds, Tesla’s showed off the results of a test that pumped gas-mask-necessary levels of pollution into a bubble, inside which the Model X’s Bioweapon Defense Model neutralized the air in just two minutes.

Bioweapon Defense Mode is real https://t.co/xGNLrOyhaQ This is what happens when you turn it on: pic.twitter.com/LnkHzXTxqN

Tesla says the “extreme” pollution pumped around the car was almost 200 times worse than the world’s current highest levels seen in the Chinese capital Beijing.

But the graph above shows the filtration system cleaning the air inside (and even some of it outside) so the team could take off their gas masks pretty damn quickly.

“You can literally survive a military-grade bio attack by sitting in your car,” Tesla says.

The Tesla teams says that this technology, over anything it can do to avoid car crashes, will save the most lives as pollution kills three million people in the world every year, according to the World Health Organization.

And it could be this that makes the new affordable Model S a big hit in places like China or India, which are almost level-pegging on cancer-causing pollution in big cities.

The test was likely prompted by questions raised over whether Tesla cars offer a certified HEPA air filtration system like those used in anti-bacterial medical environments.

If in the end it proves they don’t, well then Tesla is setting itself up for an elaborate and embarrassing Volkswagen-style fall.