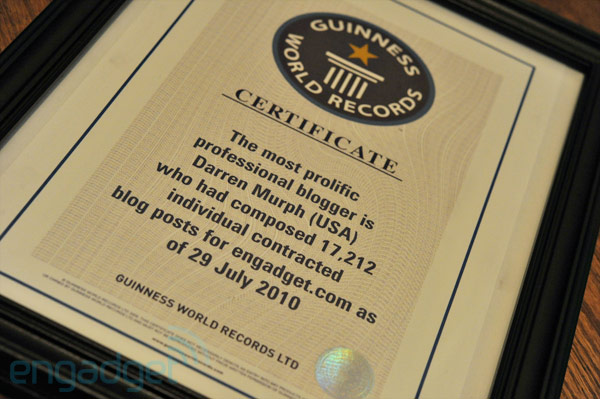 According to Engadget, the publication’s own Darren Murph – who is obviously the blog’s most frequent writer – has been awarded the first ever Guinness World Record for “most prolific professional blogger” for composing a total of 17,212 posts as of July 29, 2010, which works out to about 11-12 posts per day over four years, assuming Murph wrote every day (which we’re guessing he did).

Total word count on Engadget: 3,389,148. Apparently, his most prolific day was during CES 2008 when he wrote 59 posts, and Murph, ” intends to defend the title for the rest of his natural life.”

This got us thinking – will Guinness now start giving out plaques for all kinds of social media? Most tweets ever perhaps? That would be much harder record to keep a hold of than Murph’s most likely, but we’ll reach out to Guinness to see what other social media records are currently held and/or if they have other ones in mind.

UPDATE: Guinness got back to us and gave us two social media related records: Murph’s and one for the #beatcancer campaign by @thatdrew:

The most widespread social networking message was #beatcancer, created by Everywhere and posted 209,771 times on Twitter by different individuals within 24 hours of its first appearance on 17 October 2009.

Here’s a picture of the certificate that Engadget included in the announcement:

Read next: Google working with carriers in Asia for Google Apps sales