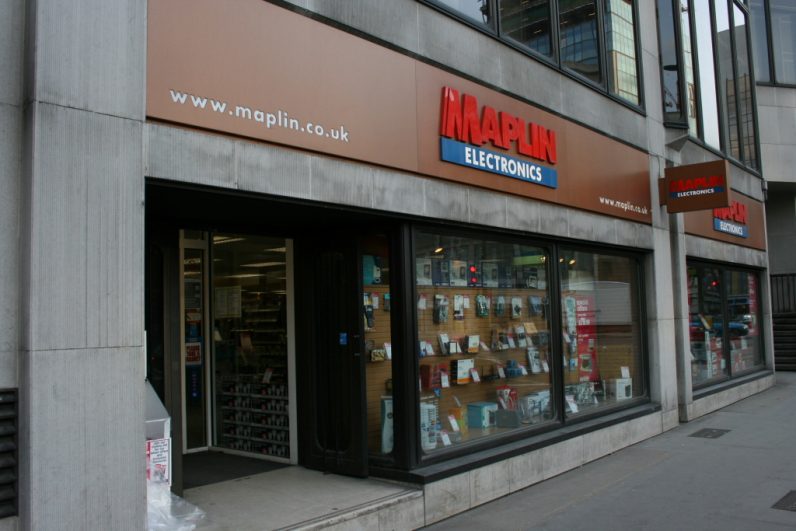 There’s some sad news for the gadget-buying populace of Britain. Troubled (but iconic) geek retailer Maplin has entered administration after it failed to find a buyer. While its 211 shops remain open, the chain’s prospects look unfathomably bleak.

Maplin wasn’t just any old store. It’s was special. I guess the best way you could describe it is as almost analogous to Fry’s and Radio Shack in the United States.

At one point, it stocked virtually every computer component you’d care to mention, along with a generous selection of general electronics gear. In short, it was a mecca for nerds. So, what happened?

This makes me sad + happy.

I was once a nerdy kid, saving up pocket money for electronic components from Tandy in town for a crap flashing LED/sound project that never quite worked.

Now I'd be a kid buying an arduino online. The world changes. The world is better. Sorry Maplin. https://t.co/d3RDN3tEDX

One often-repeated complaint was it became far too expensive, and ultimately failed to compete with online retailers. That’s something I personally agree with.

Although Maplin was handy in a pinch, shopping there meant spending vastly more money than you would online, which deterred many punters. Its website, for example, lists a 10 meter HDMI cable for £49.99. The equivalent item costs £8.99 on Amazon.

Here’s another example: A few years ago, I paid my local branch a visit to buy some Arduino gear. At the time, I was in the middle of a Computer Science degree, and was studying physical computing. Maplin admittedly had a decent selection of official Arduino components, but it was vastly more expensive than Amazon. In the end, I went on eBay and ordered some Chinese knock-off boards for a fraction of the cost.

Another complaint is that Maplin lost track of its core demographic: hobbyists and tinkerers.

Kind of sad about Maplin going under: it was always the prime destination for the electronics and gadget enthusiast who hasn't yet discovered the internet

Earlier incarnations of Maplins were awesome. Speak to any British nerd of a certain age, and they’ll tell you about ultra-knowledgeable sales clerks, and shelves piled high with obscure computer components. But in recent years, it lost focus, and shifted towards a more general audience. It started selling things like drones, tablet computers, and smart home gear.

Never really got Maplin. Seems to sell lots of drones and DJ equipment, plus bits and pieces for build-your-own PC types. Not convinced by argument that there is a place for it on High St https://t.co/IL0fMqT4AD

Anyone can sell an iPad, but nobody bothers to cater to die-hard techies. The level of selection and technical expertise that Maplin once offered set it apart. I’d argue that it was a major tactical misstep for Maplin to go after the same market as PC World and the Apple Store.

A finger of blame has been pointed at Brexit for Maplin’s collapse. According to company CEO Graham Haris, the drop in the value of Sterling is partially to blame for the collapse, although he admitted other other factors were at play. In a statement, he said:

“The business has worked hard over recent months to mitigate a combination of impacts from sterling devaluation post Brexit, a weak consumer environment and the withdrawal of credit insurance. These macro factors have been the principal challenge not the Maplin brand or its market differentiation.”

Hopefully Maplin can be saved, although its prospects don’t look especially promising. If Maplin ultimately folds, it’ll be a tragedy, particularly for the company’s 2,500 employees.

It would also leave a gaping hole on the high street. For all its flaws in its latter days, Maplin was the only retail store that bothered to cater to the lucrative geek demographic. And as someone who has spent countless hours browsing its aisles, I’ll be sad to see it go.