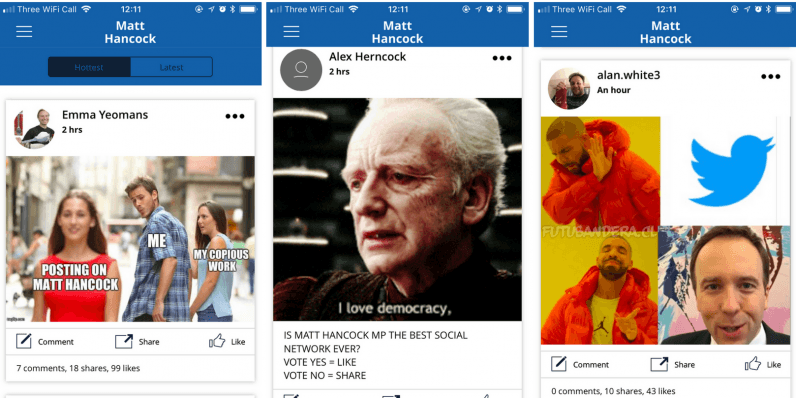 Yesterday, a UK politician launched his own app. Called Matt Hancock, and from UK Conservative MP Matt Hancock, the app is a fascinating experiment in digital democracy. Think of it like Facebook, but centered around one relatively minor political figure, and aimed at people living in one obscure, mainly rural part of the UK.

Through the app, Matt Hancock can share updates with his constituents and hold Periscope-style livestreams. There’s also another feature called Have Your Say, which looks like Facebook’s newsfeed. Constituents can post photos and text, allowing them to express concerns in an arena that’s transparent and open.

Hancock launched the app yesterday morning with a press release. Instantly, it became a surprise viral hit, and for all the wrong reasons. 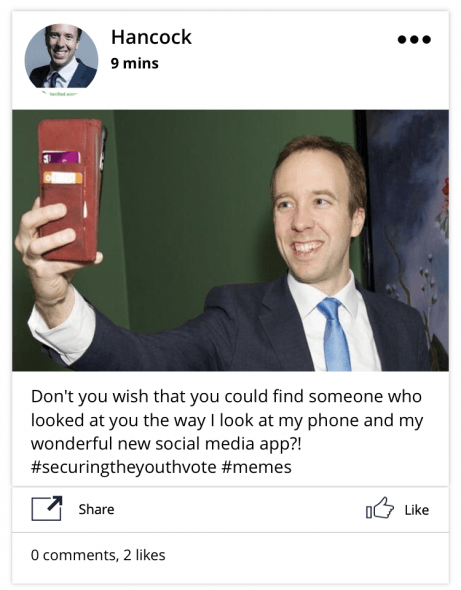 I’m not going to lie, it was extremely funny. I said as much when I covered it yesterday morning. But jokes aside, maybe there’s another conversation worth happening?

Hancock’s app is a first for UK politics. I literally can’t think of any other MPs that’ve launched their own app-based social networks. Although the execution is undeniably flawed (the lack of content moderation and user verification didn’t help things. Privacy advocates have expressed concerns, too), it’s pretty groundbreaking. Nobody in British politics has ever done this before.

And it’s worth recognizing that this is a step towards addressing the ‘grayification’ of politics. With an average age that’s hovered around the 50 mark for the past few parliaments, the UK’s Politicians are overwhelmingly old, but so too are the voters who engage with them. That’s certainly true in the UK. Attend a hustings or MP’s surgery, and you’ll notice those attending tend to be much older.

Maybe tech is the answer? I don’t want to patronise young people. I know a lot of young people who are passionate activists across several different political parties, but many more feel disconnected from politics entirely, and don’t want to engage. They feel shafted either way, so what’s the point?

Although the execution of Matt Hancock (again, I’m talking about the app, not the MP) left a lot to be desired, it attempted to offer an accessible and slick way to interact with a local representative that I feel could have pulled a younger demographic into the conversation.

And that’s really important. Older people vote. They also tend to vote as a bloc, mostly for the ruling Conservative party, who have in turn fiercely protected their benefits and allowances while simultaneously chipping away at those offered to younger people.

During his time in parliament, Hancock has consistently voted for cuts to the welfare state. He voted for many of the controversial things I just mentioned. I can’t help but wonder how he would have voted if the app bearing his name was filled with angry messages from young people? He wouldn’t be able to ignore it, like he would an angry Twitter comment. He’d have to own it.

Matt Hancock has responded to his app’s unlikely success with good humor. That said, it’s unlikely it’ll ever amount to more than being a home for trolls and wind-up merchants. There’s been too much bad press. The few legitimate users who joined on day one were quickly drowned out by louder, more mocking voices.

Some hilarious posts in the Matt app today. But delighted to hear so many really see the value in MPs using this tech to engage with their constituents pic.twitter.com/bbVhtbsdfS

And that’s kinda sad, because I’d have liked to see how it played out.

Would it have taken off and become a model for how Brits interact with their representatives? How would Hancock have responded to negative feedback and angry posts? Would it have engaged a younger audience?

All questions we are now unlikely to find out. But at least the memes were good.

Read next: Get a boatload of awesome licensed design assets for life for under $20