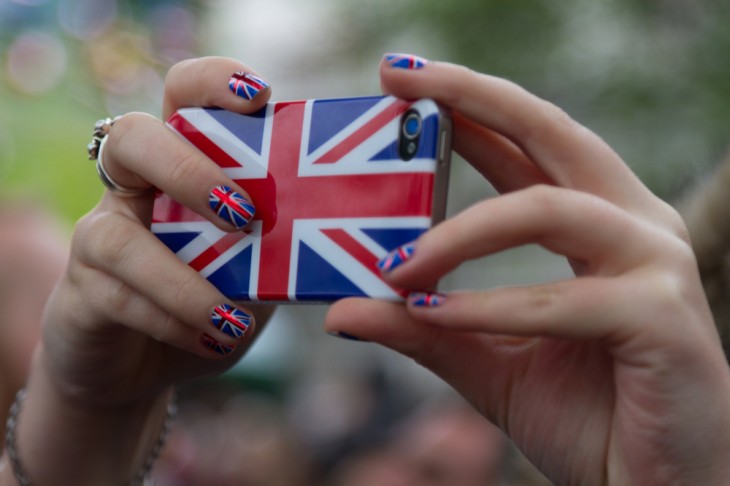 They’re in your pocket, your purse or at the bottom of your laptop bag whenever you need them. They’re built in East London, near trendy Shoreditch or the lovable eyesore known as Silicon Roundabout. (Not to be an eyesore for much longer it seems!) They connect you to the world, empower your inner photographer and help you get home at night after you’ve had a few.

Combining form and function, here are 10 of London’s most loved mobile apps listed below for your downloading pleasure.

“My favourite app has got to be Hailo!” says mobile app development agency Fueled‘s London-based designer Rob Palmer. “I use it all the time, its uptake has been amazing, especially the tie in of using modern technology to enhance a traditional service; the design and UI is on point and overall for me, it is just a perfect app!”

With over $50 million in funding, Hailo is revolutionizing the way Londoners hail taxis. Actually, it’s not just Londoners. Hailo, which claims to have the largest app-based taxi network in the world, enables customers to order a licensed cab in 11 cities around the world including New York, Tokyo and Dublin.

Founded by three experienced entrepreneurs and three London cabbies, Hailo takes a 10% cut of every booking for connecting drivers with passengers in just two taps. And my favorite part? There’s no need to pull out your wallet, Hailo bills your credit card and emails you a receipt seconds after you’ve shut the door.

The Daily Spank may not be the most useful app on this list but it earns extra kudos for inspiring this post. I’ve been spanking photos and bragging about my 10-day winning streak to a lot of people who probably think I’m talking dirty. Actually, The Daily Spank is a delightful, photo-sharing app meant to inspire you to be creative each day with a visual prompt like “Take a Photo of Something Juicy” and “Take a Photo of Something That Starts with S”. The app’s co-founder Malcolm Scovil had the idea for the app while at Burning Man; apparently someone was trading chocolate chip cookies for rear end spanks, neurons clicked and sometime later The Daily Spank was born.

Unsure if you want to take a Hailo, a bus, walk or cycle to your destination? With a statement we can all understand, CityMapper is on a mission to “save Londoners from London!” The highly rated app is loved by both locals and ex-pats who swear by its easy to use interface to get them where they need to go.

The app combines its own algorithms and TfL’s Journey Planner to offer every realistic traveling option between 2 points in London including buses, tubes, cabs, cycle hires and trains. Location search is built off of the Foursquare API and you can personalize the app with Favourites, MyPlaces and a very useful “Get Me Home” feature. Know you just want to take the bus? Try BusMapper by the same team.

Fresh from the digital decks, streaming radio and instant dance party machine Mixcloud just dropped its latest iPhone app, which has seen more than 1 million downloads in just a few days. The new version is tremendously better than the previous, and the company is expecting that 1 million digit to quickly turn into 10.

The complete re-build of the app features a new design, a personalized feed and discovery tab, in-app notifications, all the usual suspects in the sharing category and a revamped search system. Not on iPhone? Check out the mobile website at http://m.mixcloud.com and if you’re up to be an Android beta tester, get involved. Also, check out TNW on Mixcloud!

Just when you thought there couldn’t be one more angle to the photo-sharing app world of fun, SlickFlick came along to let sticker-loving storytellers connect over things like the band One Direction, games like Minecraft, vampire shows and teenage romance. Young fans seem to like the neutrality of the platform and the lack of censorship versus Facebook. To monetize, SlickFlick partners with character centric games and toys designers to create story themes so users that are already fans of those games and toys can create fan fiction.

DePop is an app to sell almost anything you can take a picture of; popularcategories include tech, fashion, literature and old vinyl. Combining the peer-to-peer marketplace functionality of a Craiglist or Gumtree with the mobile functionality and convenience of Instagram, the app lets you snap a photo of something you don’t want anymore and sell it to strangers using PayPal. The app has some pretty hot competition as it’s playing in the same space as the newly launched, socially powered selling platform Bondsy out of New York City.

An oldie, but a goodie, Shazam is the original music identification app. Ever sat in a cafe and listened to a song you totally dig but have no idea what the track is called or who the singer is? Simply hold up Shazam somewhere near the speaker and tap, and in 30 seconds or less you’ll get the name of the artist, song, social profiles and ability to buy it in iTunes just like that. While the company was founded in 1999, and it’s been a hot minute since we’ve heard anything from the music startup, this past month they released their app for Windows Phone 8 and a brand new iPad app.

Simply put, Dattch is Grindr for lesbians. I first met founder Robyn Exton while she was learning to code at General Assembly London [one of my former employers]. Since then, Robyn has built an app and networked herself successfully through the London startup scene catching the attention of more than a few social network tycoons and landing herself a spot in the Wayra accelerator program’s recent cadre.

YPlan? Exactly. This mobile app has got you covered with its smart and curated list of tonight’s events. Live in both New York and London, YPlan lets you purchase tickets to various concerts, theater performances, comedy shows and lots more. The app is designed for spontaneous individuals who are on the go and looking for something to do in London. The team even has Stephen Fry on record praising the app — he says: “YPlan – now that’s a seriously good app. Last minute events of all kinds booked in seconds. Damned smart.”

Dubbed the “TV sidekick”, Zeebox is a free iPad app riding the 2nd Screen phenomenon. The app combines a UK TV guide with social features, displaying a list of all the current and upcoming shows you can watch and which of your friends are watching that particular show. Earlier this year, the startup launched an automated advertising platform called SpotSynch that will show users targeted digital advertisements simultaneously with specific TV programs and commercials.

Last and certainly not least when it comes to changing it up is Lutebox, a mobile app that lets you snap a photo and share it with a voice message. Pivoting from video chat to social shopping to photo-sharing with voicemail, Lutebox founder Ali Ahmed, the former entrepreneur-in-residence at Groupon, may have finally landed on a business plan. “The app is really simple,” explains TCIO’s Pasa Mustafa. “It’s 3 clicks to share a photo with a voice message and mobile is all about simple friendly and efficient UI.”

Now you know what’s on our phones… what made in London apps do you love? Share them in the comments!

Full disclosure: This post was written thanks to Help Me Write, a London made consumer tech product I’m working on with the Makeshift team. Thanks to everyone who voted.

Read next: 8 SaaS apps that are changing the way we do business