Cambridge Healthcare (CHL), the organisation behind the health related social network, ‘How are you?‘  has announced a new round of funding to the tune of one million pounds.

How Are You? was designed in line with UK National Health Service (NHS) and Department of Health policy, to help patients take more control of their health care planning. It falls in line with the NHS programme for Right Care Shared Decision Making (SDM) launched last year by Secretary of State of Health Andrew Lansley. 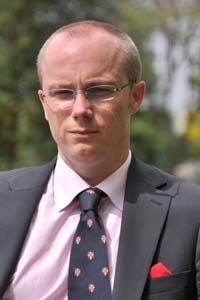 CEO Dawson King is naturally delighted with the new deal. He says that CHL has been primarily focused on research and development and that the investment will allow him to drive adoption within the NHS as well as supporting international business development. “Being a solo-founder, I’ve done all the development myself to-date,” says King. “That’s going to change; I might even take a holiday too!”

Apart from the excitement of a great big funding deal, King is also very pleased to be working with Lopez and he feels that he is the right investor for CHL. “It’s funny, he says, “You can spend literally months dancing with some investors before getting a term sheet. Then along comes someone who is a perfect strategic fit and within a few weeks you have done a deal. I consider us very lucky to have Gerard on board and I’m excited about working with him.”

Your health in your hands

‘How are you?’ was designed with people who suffer long term illnesses in mind and that it has opened up the idea of working with healthcare data. The service launched six months ago with a basic version that allowed patients to view and edit their electronic medical record and collaborate with health professionals online.

Since then the application platform has also been released allowing developers to build secure apps and connected healthcare devices which can access patient records hosted virtually in the NHS N3 network.

Some might find it initially a bit strange to mix a social platform with health care. ‘How are you?’ reassures uses that its service is secure and on the social side of things, you get to share, discuss and talk about what you like. As a record of health, the security of the system falls within the protection of NHS servers. As explained on the site:

Security of your information

Your information held in the service is stored on servers within the UK, within the NHS N3 Network and delivered by an ISO/IEC 20000 accredited service organisation. For more information on N3 Network Security, please visit  n3.nhs.uk .

In addition to the comprehensive protections built into the NHS N3 Network we guard your privacy using recommendations of industry leading security professionals and strict security features. A report describing our security systems and architecture in detail is available here .

More recently, a free iPhone application was also launched which includes medication reminders, dosage tracking for medicines and check in services as well as in-app notifications of appointment reminders and badges.

To further establish this service for healthcare systems, Microsoft Health has signed an exclusive partnership agreement with Cambridge Healthcare which will see ‘How are you?’ integrate with and become the UK’s patient and healthcare professionals’ interface to Microsoft’s Clinical Application Framework. With the combination of existing NHS IT systems, the portal can be used as a platform on which to build a a whole host of future applications.

CHL is already chasing its international aspirations having just opened an office in Beijing and hired a team that is working with the Ministry of Health to support its five-year healthcare reform plan. King has his sights on rapid expansion and feels that there are unique qualities to his service that will attract international business.

“We expect to open offices in New Zealand and the US within the next twelve months,” he says. “International interest in How is you? is significant as a consequence of our unusual business model. We provide our product and platform free to NHS patients and professionals but charge for international licensing.”

Read next: DIY launches a community for creative kids who make things