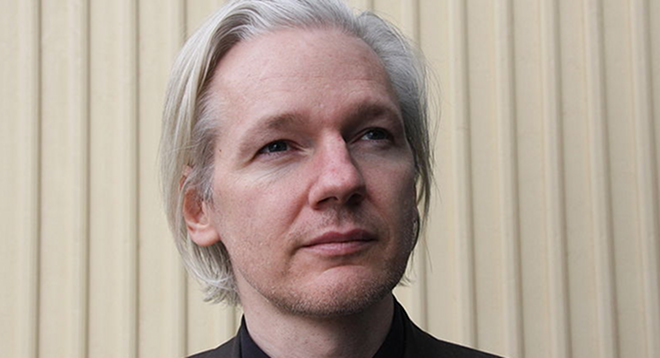 Saturday saw over 1,000 cities worldwide swept by Occupy Protests, as the movement has gone global, and London was certainly no exception. London’s financial district attracted over 3,000 protesters, among them none other than Julian Assange, taking part in Occupy London Stock Exchange, or OccupyLSX.

Your Anon News posted images of Julian Assange arriving at the protest sporting an Anonymous mask, along with images without, proving that it was in fact the Wikileaks founder. The photographs, snapped by photographer Mike Kemp, tell part of the story of how Assange’s appearance at Occupy London was met.

Assange stated that a police officer forced him to remove the mask, and as a consequence, in a seemingly impromptu speech to one group of protesters, Assange spoke about anonymity, saying:

Under a new section used, people cannot wear masks in London, they cannot wear facial coverings in London, and that basic anonymity is denied to people. I say, that sometimes it may be legitimate to deny anonymity, but we should not accept it until Swiss bank account and offshore bank accounts are also denied of their anonymity.

Assange went on to say:

Assange’s appearance was met with cheers by most protesters, as well as some choice chants addressed at the media, with one protester reportedly shouting, “Let Jesus speak.” Not all of the protesters were welcoming, and before giving his speech, a group of protesters booed Assange, chanting “No heroes!”

To see Assange’s speech about anonymity at Occupy London, check out the video below:

If you enjoyed this, it’s worth reading Who Owns The Internet?

Read next: Yahki: A Middle Eastern alternative to Storify