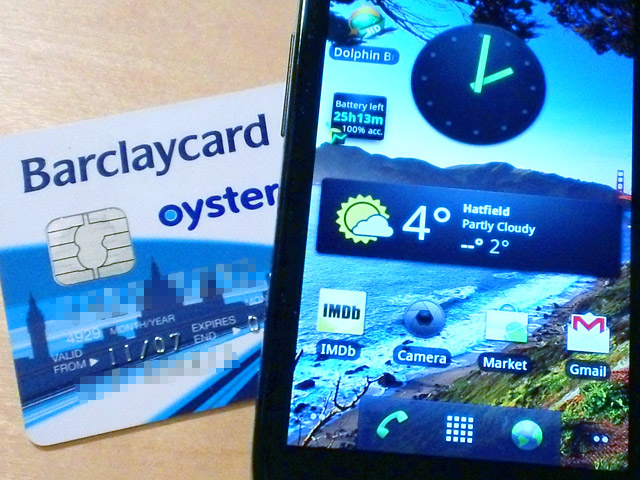 Back in January, we reported Everything Everywhere – the parent company of Orange and T-Mobile – was teaming up with Barclaycard to make Near Field Communications (NFC) payments a reality for its customers.

For those of you that don’t know, NFC payments mean that customers don’t need to use cash or credit cards, they simply swipe their mobile phones across a special handset at the checkout, and voila.

The service is designed for small purchases of under £15, and contactless readers will be available at over 50,000 UK stores. You’ll know that a store has the special reader when it displays the contactless payments symbol, and Pret A Manger, Eat and Subway are among the outlets to have signed up already.

Quick Tap uses a secure SIM-based approach to mobile payments,  and Orange customers will require a ‘Quick Tap’ enabled handset. The scheme launches with a Quick Tap enabled version of the Samsung Tocco Lite, and the device will be available on pay as you go and pay monthly price plans. More handsets are expected to follow from a selection of manufacturers.

Barclaycard, Barclays debit or Orange Credit Card users can transfer funds of up to £100 simply and securely onto the handset’s Quick Tap app, after which the phone is ready to make payments of £15 and under in a single transaction.

The payment app sits on the phone’s home screen and it contains information such as electronic statements detailing Quick Tap purchases, which should make it easy for shoppers to monitor their spending on the go.  To support the launch, Barclaycard is providing Orange customers with £10 cash added to their account upon activation, and 10% cash back on all Quick Tap purchases made in the first three months.

“This is the first time that customers can use their mobile to pay for goods and services in shops across the UK rather than using cards or cash. They’ll be able to do this, safe in the knowledge that this is a secure technology brought to them by the biggest names in payments and mobile technology. Barclaycard launched credit cards in the UK over 40 years ago and have been leading the evolution of payments ever since.”

Mobile contactless payments builds on existing contactless payment technology, with 12.9 million contactless credit and debit cards already in circulation. And for those concerned about security, users having the option to enter a PIN on their handset before each transaction.

There’s thought to be over 60m mobile phones in use in the UK, so this really is a major development for consumerism and we’re likely to see many more mobile networks and handset manufacturers launching their very own contactless payment services. This is the start of something very big, and it may even herald the beginning of the much-mooted cashless society.

See how it all works for yourself:

Read next: Upcoming Tech & Media Events You Should Be Attending [DISCOUNTS]