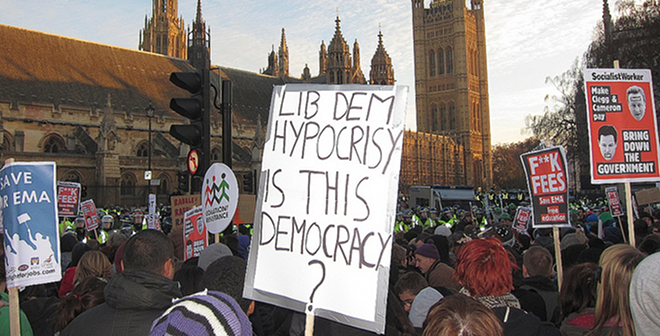 As the global economy sits in depression it’s little surprise that people in countries around the world are turning to protesting on the streets. Now there’s a mobile app designed to help them.

Sukey comes out of the UK and is a set of applications designed to keep protesters protected and informed.

The service, which goes live tomorrow morning to tie in with an organised student protest in London, runs in mobile web browsers and promises to display a wide range of information about the protest, including live updates about any trouble that might be brewing between the police and protesters along the route. Users can submit information about the current situation via Twitter, Google Latitude, Flickr, TwitPic and SMS.

For those without a web browser on their phone, Sukey will be tweeting out updates, which users can subscribe to using SMS alerts. The name Sukey stems from the nursery rhyme ‘Polly put the kettle on’, in which a character called Sukey “takes it off again”. Police in the UK have been criticised for controlling protests in recent years via a process called “Kettling“. Helping protesters avoid Kettling situations will be a key focus of the app when it goes live tomorrow.

While version one of the service has been designed specifically for tomorrow’s protest, a second edition that should work with protests across the UK is promised for the future. The team behind Sukey is open sourcing the project too, meaning that people around the world could adapt it for their own protests. Of course, it won’t help if your country opts for a communications blackout, but Sukey is a great example of developers pulling together to create a free tool for social good.

Full details of how it works can be found here.