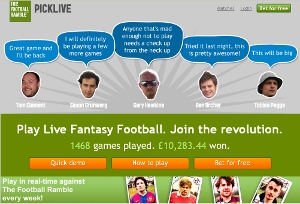 Picklive, the online “real-time fantasy football” game aimed at football (AKA soccer) fans watching live games on TV, is making a bid to broaden its reach by launching a co-branded partnership with one of the UK’s best known football podcasts.

The London-based startup has teamed up with The Football Ramble to launch a site where players are pitted against the podcast’s team during live matches each week.

As we explained in our initial coverage, with Picklive users select three players from a football match being broadcast live on television. They are awarded points according to the relative performance of those players versus those selected by rival users.

The Football Ramble is currently number 6 in the UK’s iTunes sport podcasts chart, its presenters have appeared as Sky News pundits and the show features in popular football videogame Championship Manager 2010. Picklive CEO Tim Morgan explains that the partnership was an organic process. “We’ve been pals with the Ramble for a while now. We play football and have social events together. Over time it seemed to make sense since us and them are pretty like-minded and operate in a similar area.”

Morgan says he would consider other partnerships that could attract large audiences of sports fans, “But they’d have to be the right fit.”

Meanwhile, Picklive recently launched a variation on its main game called ‘The Big Game’. Unlike standard games, which last seven and a half minutes, these games last the full length of a match, with participants selecting five players from the match instead of the usual three.