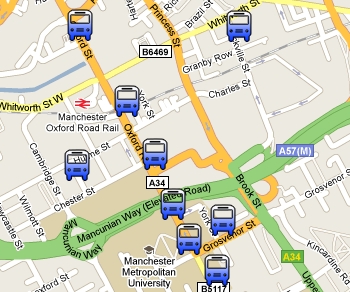 A group of young people have been taking advantage of recently released open data to create a couple of really useful web apps for travelers.

Ben Webb and Josh Pickett are part of the Manchester arm of the Young Rewired State programme that challenges young people in the UK to “Find digital solutions or visualisations for things that either interest or irritate them” using government data.

Webb and Pickett chose to use data about local buses in Manchester released last week to create two apps. The first is a Google Maps mashup that shows where all buses in the city region should be right now if they’re on time. It refreshes every few seconds to give an idea of where your bus should be in an ideal world. While not quite as useful as the almost-realtime London Tube map that emerged recently, that’s down to the fact that real-time bus data isn’t available at present. The other project is a mobile web app that shows real promise. Designed to quickly and simply display when your next bus is due, it allows you to enter which bus you’re waiting for and which stop you’re at. It then displays what times that bus serves the stop. Simple and effective, it’s exactly what many bus passengers need and the presentation is perfect for mobile browsers.

There are some teething problems – it doesn’t support multiple routes with the same number and only supports one direction of travel per route, rendering it useless half the time – but remember this is an app built from scratch by two teenagers in two days. Once these problems are fixed, and perhaps support for geolocation is added, they’ll have built something that many regular Manchester bus users will find invaluable.

Projects like this should encourage other local authorities to follow Greater Manchester Passenger Transport Executive (GMPTE)’s lead in releasing bus timetable data. As these projects have shown, useful results can be realised very quickly.

Young Rewired State teams from around the UK are presenting their work at an event in London today.