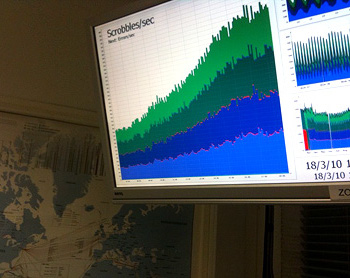 Last.fm has some pretty ambitious plans for the next stage of its growth.

There hasn’t been much of note to say about Last.fm in recent times. The London-based company hasn’t rolled out any major new features or services since it was acquired by CBS in 2007. [Update: a reader calls us out on this below, and quite rightly too, we perhaps worded that a little strongly, although the last year or so has been comparatively very quiet for the company]. We’ve been wondering what they were up to and now we have some answers.

Jemima Kiss over at The Guardian has been talking to David Goodman of CBS Interactive and he shared some interesting tidbits about Last.fm’s future direction. The company’s US audience has more than doubled in the past year, from 3.5 million unique users per month to 8 million. With this in mind CBS has some big plans for all the data that Americans are pouring into the service.

It certainly will be interesting to see how successful Last.fm is with these plans, which rely on getting its scrobbling technology built into as many devices as possible in order to make its data as rich as it can. The company already has partnerships with audio equipment manufacturers so expect more of those to be announced in future, we’d say.

There’s more detail about Last.fm’s plans in the original interview which is well worth a read.