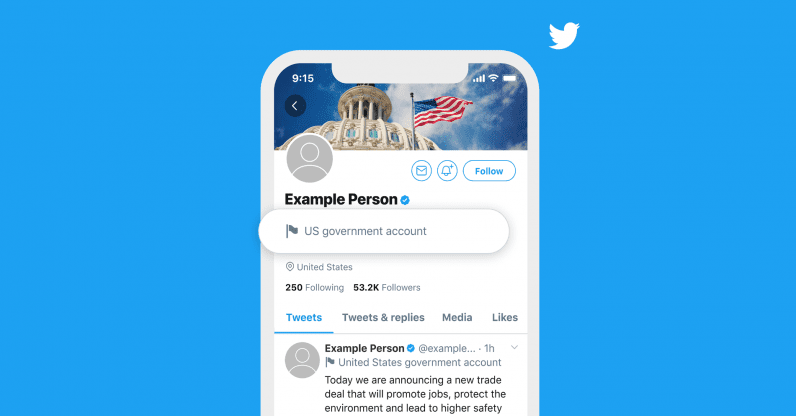 In the age of social media, Twitter is one of the primary ways governments and politicians speak to their constituents–and how they can potentially spread propaganda. Following a similar move by Facebook, Twitter will soon begin to label accounts strongly associated with governments.

If you click on one of the labels, you’ll be redirected to an article explaining the policy. To start, Twitter is only applying labels from the five permanent members of the UN Security Council: China, France, Russia, the UK, and the US. The company plans to expand to “a wider range of countries” in the future.

Somewhat confusingly, the company also says that it currently isn’t labeling ” the personal accounts of heads of state, as these accounts enjoy widespread name recognition, media attention, and public awareness.” While that’s understandable, there also doesn’t seem to be any harm in labeling these accounts for the people who may not be in the know.

Things get a bit more interesting with the state-affiliated media category. Twitter defines them as such:

State-affiliated media is defined as outlets where the state exercises control over editorial content through financial resources, direct or indirect political pressures, and/or control over production and distribution. Unlike independent media, state-affiliated media frequently use their news coverage as a means to advance a political agenda. We believe that people have the right to know when a media account is affiliated directly or indirectly with a state actor.

These accounts and their tweets will no longer be amplified through Twitter’s recommendation system, including the home timeline, notifications, and search (this does not apply to the first category).

To be clear, the company isn’t labeling media organizations that are state-financed if they are considered to have editorial independence, like the BBC in the UK or NPR in the US. Twitter said it consulted with experts to develop its categorization process, including members of its Digital and Human Rights Advisory group. If an account owner feels they’ve been improperly labeled, they can appear the decision to Twitter.

Read next: You can now try the macOS Big Sur public beta