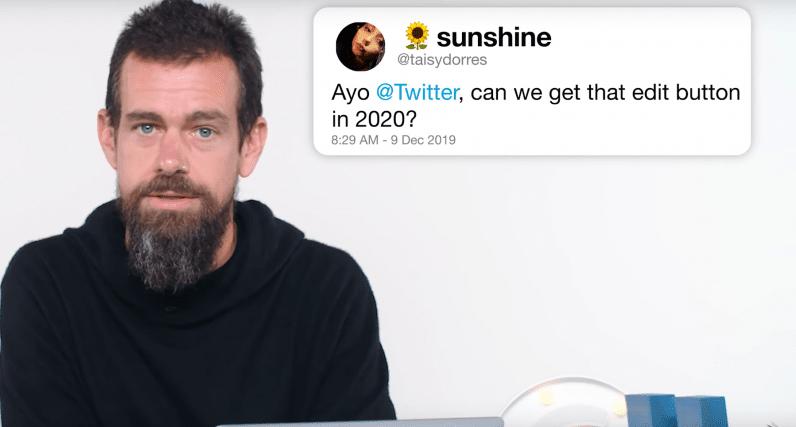 The edit button, a feature just about every avid Twitter user has wanted at some point, will probably never become a reality. At least, that’s what Jack Dorsey says in a new Wired video.

Dorsey answers several questions from Twitter users in the video, and inevitably someone asks whether we’ll get an edit button in 2020. “The answer is no,” says Dorsey in a matter-of-factly manner.

Dorsey then goes on to explain some of the reasoning behind the decision. He notes that Twitter started out as an SMS service and “when you send a text, you can’t really take it back.”

He then presents the common argument that someone could edit a tweet after it’s gained popularity, changing the context of replies and retweets. It’s not like the company hasn’t seriously thought about edits though, as Dorsey notes Twitter has considered imposing a brief delay before sending the tweet – 30 seconds to a minute – to allow you to edit things like typos and broken links. Gmail’s ‘Undo’ button comes to mind.

This could pose a bit of a problem for live-tweeting events and the like, but it’s probably the safest way to go about edits. You might not think 30 seconds is much time, but someone with a large following could spread a lot of misinformation in that time. A small delay before the tweet actually goes out seems like a decent compromise for typos and the like.

“But we’ll probably never do it, ” says Dorsey, with such an inscrutable expression and deadpan delivery that I can’t quite tell if it’s sarcasm or resolute indifference.

You can watch the rest of the video over at Wired, where Dorsey addresses a number of other questions and concerns, including how Twitter handles your media and typos in hashtags. He also says you can tweet Twitter product lead @kayvz to get verified, who claims he is not, in fact, the Verification God.