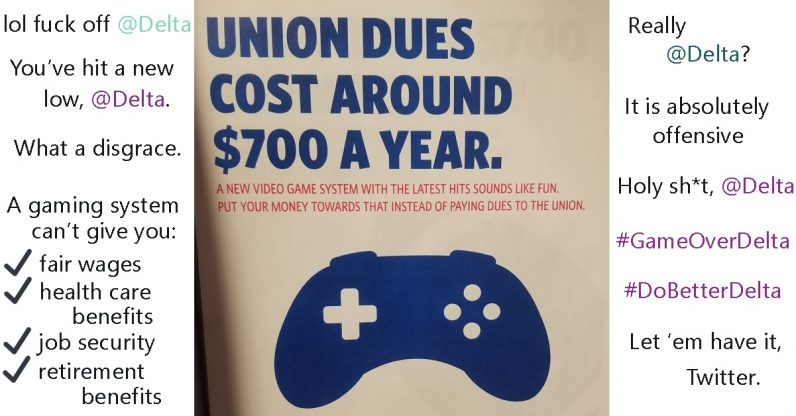 Delta Airlines is passing around anti-union posters comparing union dues to the price of a new console, implying the latter will bring employees more joy than the former. And this particular message is uniting both gamers and pro-union labor leaders in a single message: WTF, Delta?

The message, a poster emblazoned with a non-brand-specific controller, was spotted by Common Dreams writer Eoin Higgins. It reads, “Union dues cost around $700 a year. A new video game system with the latest hits sounds like fun. Put your money towards that instead of paying dues to the union.” At the bottom is a URL for Delta’s anti-union site, along with the slogan, “It’s your money. Don’t you think you should keep it?”

Wow, so we’re not even trying for a subtle message here, are we? Similar posters surfaced tempting users to spend their union dues on baseball tickets and “a few rounds” on a night out watching football.

Let’s get the obvious out of the way first: a video game console and union membership are not even remotely in the same stratum. Speaking as someone who does spend around $700 on gaming per year — because this isn’t so much a job to me as it is a subsidized smack habit — even I’m saying, “Dafuq, Delta?” In what universe do you think it’s alright to talk down to your employees by implying mindless entertainment should be given more consideration than union membership? Even someone who doesn’t endorse or agree with the purpose of unions would have to agree one is substantially more important to the current labor landscape than the other.

And apparently the internet agrees with this sentiment. Within moments of the poster hitting Twitter, derisive tweets from offended gamers and labor leaders alike began lighting the company up. The hashtags #dobetterdelta and #gameoverdelta began trending. It attracted the attention of gamers who, as part of their job, belonged to unions:

1) lmao
2) scare mongering about dues is a classic union busting tactic!! is your boss ever worried about where literally any other part of your paycheck goes? are they out here trying to stop your landlord from raising the rent?https://t.co/u5XFP4QRQg

The federation of unions:

Video games, baseball, and football? Really @Delta? Our workers want a voice on the job. #GameOverDelta #1u pic.twitter.com/AdSgxSxVHh

And apparently, @Delta doesn’t want to either.
https://t.co/zxYpk0ZWcV

Even Bernie Sanders weighed in, pointing out the discrepancy between the union dues and the amount Delta’s CEO takes down in a year:

Delta told employees to buy video games instead of forming a union. What a disgrace.

Delta's CEO made nearly $22 million in 2017 while paying ramp agents as little as $9/hour.

I say to Delta: Stop trying to undercut workers' right to form a union and negotiate for better wages. https://t.co/8fx30jIfJf

The most cutting tweets were from the International Association of Machinists (IAM), the union with which Delta employees were apparently attempting to organize. Needless to say, the IAM was not pleased with the condescending tone of the message:

The IAM said, in a statement on its site, that this is motivated by an IAM outreach that included Delta flight attendants granting their support for an IAM election in Amsterdam:

Delta has resorted to defaming and spewing lies and misrepresentations about the IAM. They also continually display anti-IAM propaganda in the workplace. These are all hallmark signs of how well the IAM campaigns are doing and how scared Delta is of their employees having a voice in their careers.

Delta, for its part, responded with a statement to Fast Company:

The direct relationship we have with our employees is at the very core of our strong culture and it has enabled continuous investments in Delta people. Our employees have the best total compensation in the industry, including the most lucrative profit sharing program in the world. They want and deserve the facts and we respect our employees’ right to decide if a union is right for them. Delta has shared many communications, which on the whole make clear that deciding whether or not to unionize should not be taken lightly.

It remains to be see what, if any effect these posters will have on the Delta employee’s unionization efforts. One Chicago union had a great idea for how the company can mend fences:

Due to yesterday's uproar, it seems only appropriate that @Delta reconcile their misstep by providing all of their employees with a free Xbox. RT if you will not rest until they have ensured each employee has one. #DeltaAirlinesEmployeeXboxGiveaway

Read next: Watch: Sony made a God of War documentary as good as the game