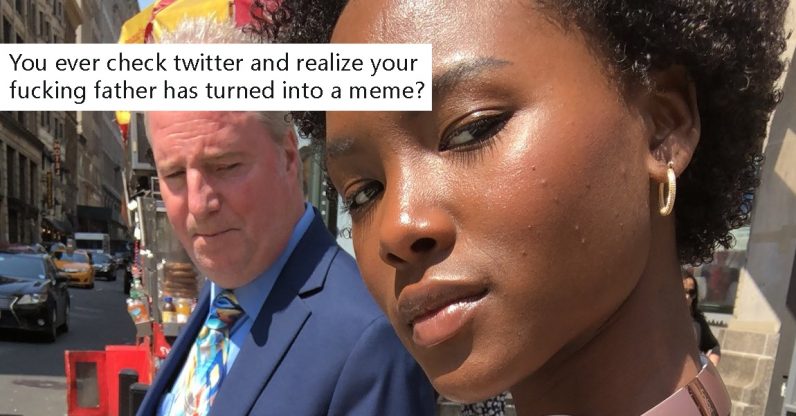 When it comes to viral internet fame, there are great ways to achieve it and some really not-so-great ways. Getting there by being caught (apparently) eyeing up a young woman, then being called out on it by your daughter, would fall into the latter category for me. Luckily everyone seems to be taking it in good humor.

The original tweet was funny enough. Model Dominique Robinson snapped a selfie on a sidewalk in New York City, not realizing until after the fact that the man next to her seemed to be glancing in her direction.

The awkward photo garnered thousands of likes on Facebook and Instagram — but as far as viral photos go, it’s nothing remarkable. But then tweet made it back to the man’s daughter, and that’s when things really blew up:

You ever check twitter and realize your fucking father has turned into a meme? https://t.co/fcGn7JpdP2

Realizing that the man — Queens resident Dennis Leavey — had been caught sent Twitter into a frenzy. Her response is now more popular than the original tweet. Daughter Alex reacted the way one would expect to seeing her dad’s lascivious eyeline going viral:

I wish I was adopted

First came the embarrassment, and then came the apologies:

Unfortunately yes🙄 I am so sorry lol

As for the look Leavey appears to be throwing Robinson, Alex Leavey revealed there was an innocent explanation: Her father is blind in one eye, and was just looking down. That said, she did ask that no one tell her mother about it. She told Buzzfeed News, “I immediately knew it was my dad and was laughing at most of the replies to it.”

Robinson, for her part, took some heat for exposing her mysterious admirer to censure, but she says she found the whole thing amusing:

I wish y’all would stop arguing over this photo and move on with your day! It’s harmless, who cares exactly where his eyes are it’s a funny photo , laugh and move on lol

Still, speaking as a daughter, I say better Alex Leavey’s father than mine.

Read next: This unintentionally hilarious AI should caption every Instagram photo