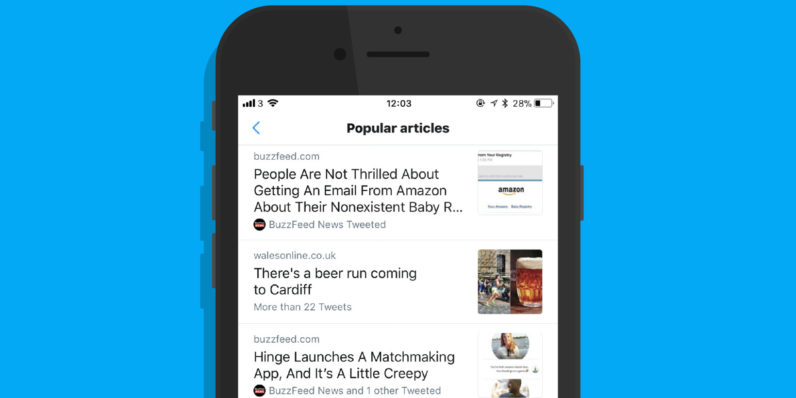 In an effort to make its platform better for new and logged-out users – and presumably, folks who don’t tweet much – Twitter is rolling out a new feature that surfaces articles that people in your feed are talking about.

BuzzFeed News first spotted links to stories under a ‘Popular Articles’ header in the Explore tab on Twitter’s mobile app today. In addition to articles that your network is engaging with, you’ll also see stories that are gaining steam among users in your area.

Twitter has confirmed that the feature is rolling out to Android and iOS, but it might be a little while before you see it in your feed.

As BuzzFeed noted, Popular Articles feels a bit like Nuzzel, which bundles links to hot stories from your network into a newsletter.

I’m excited about this feature because I don’t tweet a whole lot (I even disconnect entirely on weekends), but I do log on to Twitter to see what stories everyone else is talking about.

There are loads of people I follow who are connected to things I care about, but whose tweets I don’t particularly enjoy. As such, it feels tedious to wade through them. With Popular Articles, I hope to have to do less of that in order to find things I should be reading. Thanks, Twitter.

Read next: Report: Amazon is working on Alexa-powered smart glasses